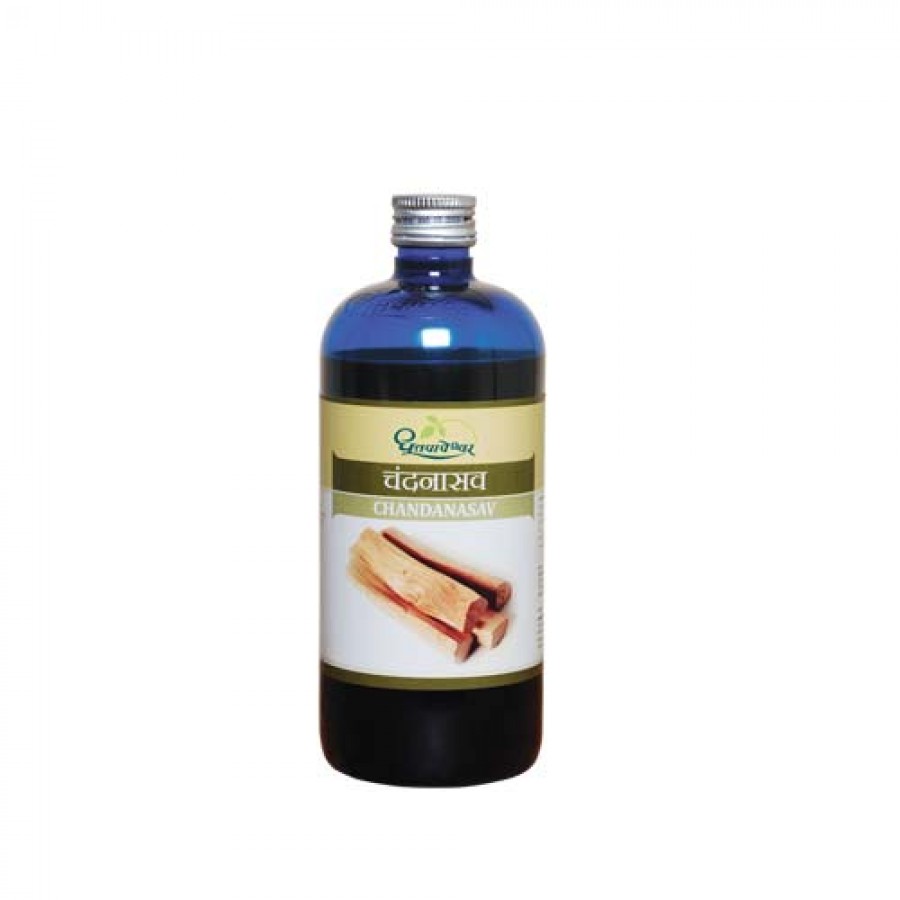 You can only purchase 96 units of this item

Dhootapapeshwar Chandanasava: It is widely used in various urinary and urogenital diseases. It acts as a urinary antiseptic and an excellent remedy for skin diseases. view detail

Chandanasav is an ayurvedic fermented liquid preparation composed of 24 herbal ingredients, with "Chandana" ie.. sandalwood as the key ingredient. It contains 5-10% of self-generated alcohol which will help in the extraction of alcohol-soluble ingredients as well as helps in preserving the active principles for a longer time. Usually, in any asava one sweetening agent is used but in Chandanasav, two sweetening agents are used in the ratio 2:1 (2 parts sugar candy and 1 part jaggery). This combination will
enhance the cooling effect of Chandanasav in addition to Chandana.

Chandanasav has SEETA VIRYA (cold in potency) which makes it the best medicine for PITTA DISORDERS. It is widely used in various urinary and urogenital diseases.It acts as an urinary antiseptic and an excellent remedy for skin diseases. Chandanasav is also used in both male and female reproductive disorders like menorrhagia (excessive or prolonged menstrual bleeding), Post Menopausal Syndrome and Leucorrhoea in females and spermatorrhoea in males. It also helps in eradicating septic ulcers in the urinary tract developed in the early stages of syphilis. Chandanasav is an excellent cardiac tonic with its cardioprotective action.

Traditionally Chandanasav is used in the treatment of spermatorrhoea and burning micturition. It is also used to improve strength and immunity. It is a natural cardiac tonic. It also improves digestive power. Chandanasav for spermatorrhoea and burning micturition. Spermatorrhoea is a sexual disorder characterized by excessive and involuntary ejaculation. It has a devastating effect on males. So Chandanasav provides a better cure for this fretful male hysteria. It is also an excellent medicine for treating burning sensations while urinating.

Chandanasav for Urinary Tract Infection
Bestowed with antimicrobial, bacteriostatic properties Chandanasav makes an excellent remedy for urinary tract infection. It also helps in reducing the pus cells in urine and prevents its recurrence. Furthermore, it also provides relief from foul-smelling urine and a burning sensation in the hands and feet.

Chandanasav as a Cardiac Tonic
Chandanasav is rich in antioxidants and it strengthens the cardiac muscles, improves heart rhythm and enhances the healing process of cardiovascular diseases.

Chandanasav for Enhancing Strength and Immunity
Chandanasav helps in increasing the white blood cell count in the blood and keeping the infections away.

Chandanasav for Digestive Disorders
Musta(Cyperus rotundus)in Chandanasav keeps the acid secretion in the stomach under control and helps in reducing gas bloating. It prevents gastroesophageal reflux disease, constipation, and diarrhoea.

Chandanasav for Reproductive Disorders
Chandanasav is beneficial in both male and female reproductive disorders. In males, it helps in reducing night falls, spermatorrhoea, promotes fertility and enhances libido. In females, it is effective in reducing menorrhagia(excessive or prolonged menstrual bleeding), Leucorrhoea (excessive thick white or yellowish discharge from the vagina). The red and white sandalwood in Chandanasav has cooling properties that help in combating the side-effects of Post Menopausal Syndrome such as hot flushes, night sweats and burning sensation. It is also useful in reducing the burning sensation associated with fever.

Chandanasav for Skin Diseases
Chandanasav can be used as an effective medicine for various skin disorders like eczema, urticaria, scabies and fungal infections.

Chandanasav is composed of natural ingredients hence it has no known side effects. However, people with diabetes are advised to keep a check on their glucose levels while consuming Chandanasav as it contains sugar candy and jaggery. Pregnant and lactating mothers should avoid taking Chandanasav unless directed by the physician.

Consume1-2 tablespoons of Chandanasav with an equal quantity of water twice daily after food or as directed by a physician.

Q. Should I avoid allopathic medicine while taking Chandanasav?
Ans. Ayurvedic medicines do not react with other medicine. Consult your doctor for further specifications.

Q. Is Chandanasav available as an over the counter drug?
Ans. Yes, Chandanasav is an ayurvedic medicine that can be purchased without a doctor's prescription.

Q. What is the source of this Chandanasav?
Ans. Chandanasav is a plant based preparation.

Q. Does daily consumption of Chandanasav cause any harm to the body?
Ans. No, Chandanasav is a completely natural and safe medicine without any harmful effects on your body.However, consume it as per doctor's advice.

Q. Should I avoid certain food items while consuming Chandanasav?
Ans. No, Chandanasav does not react with any food items. However, seek your physician's advice for a better effect. 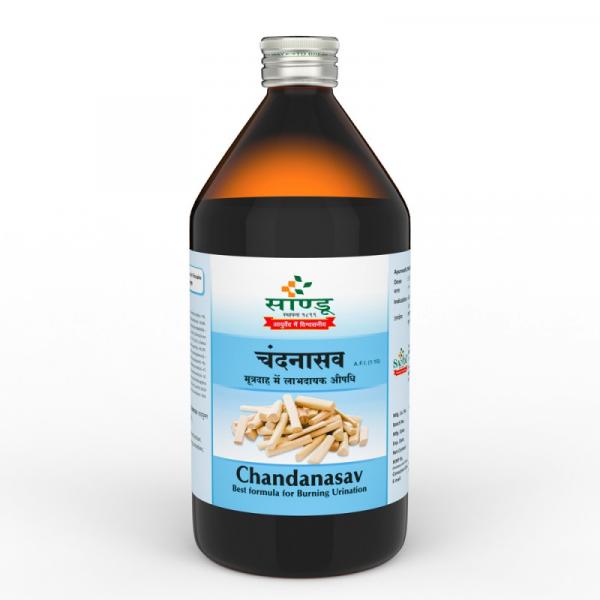 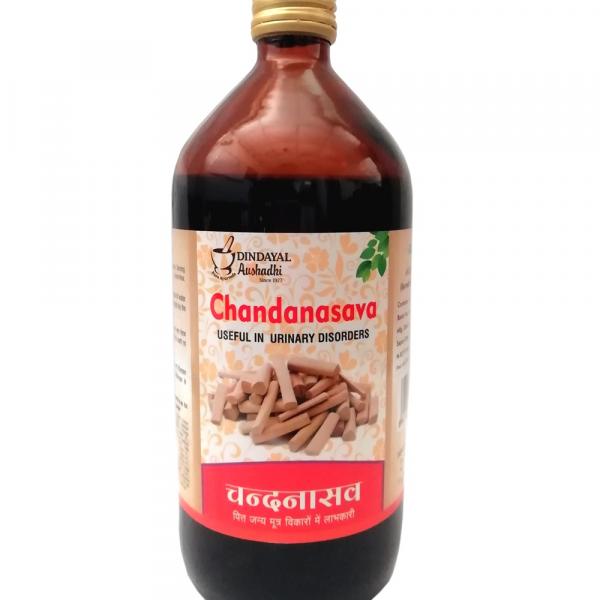 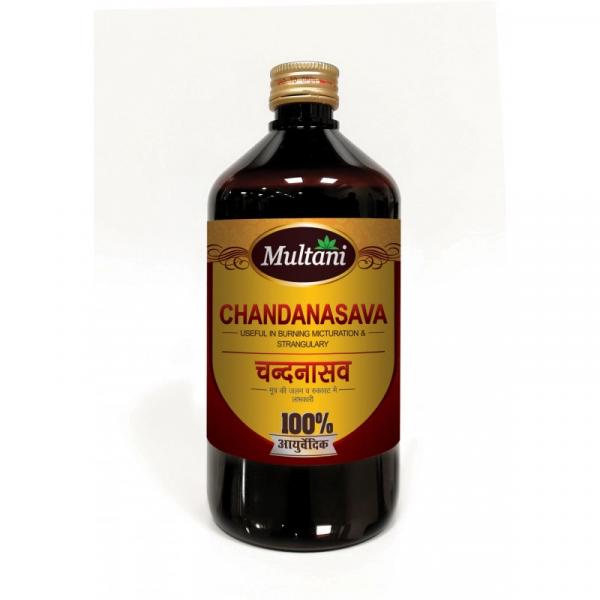 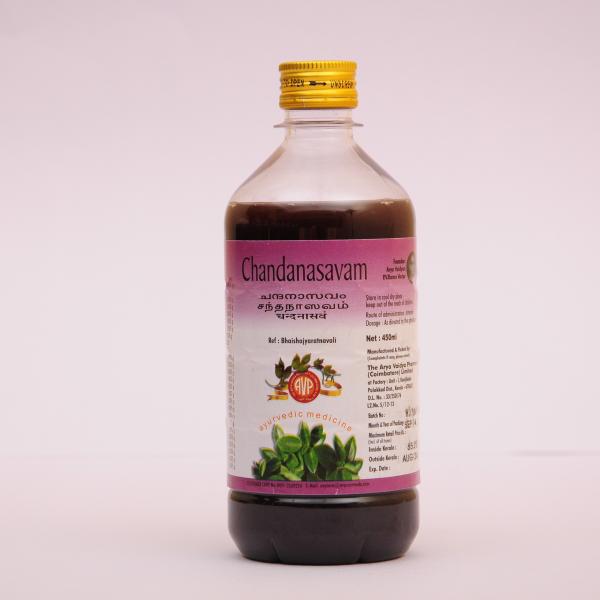 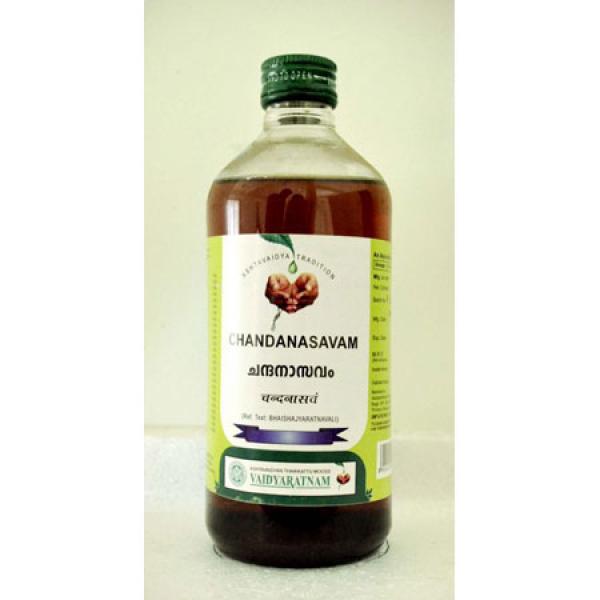 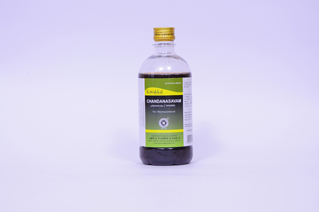 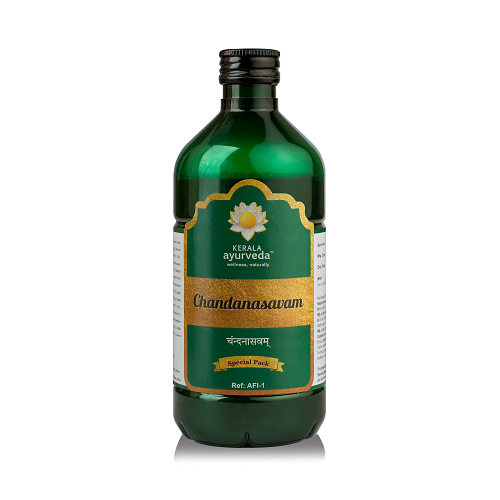 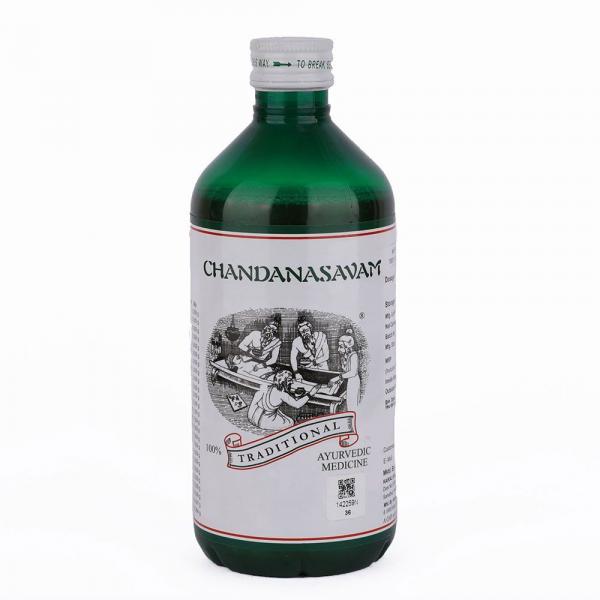