In Conversation With Dr. Shallu Garg 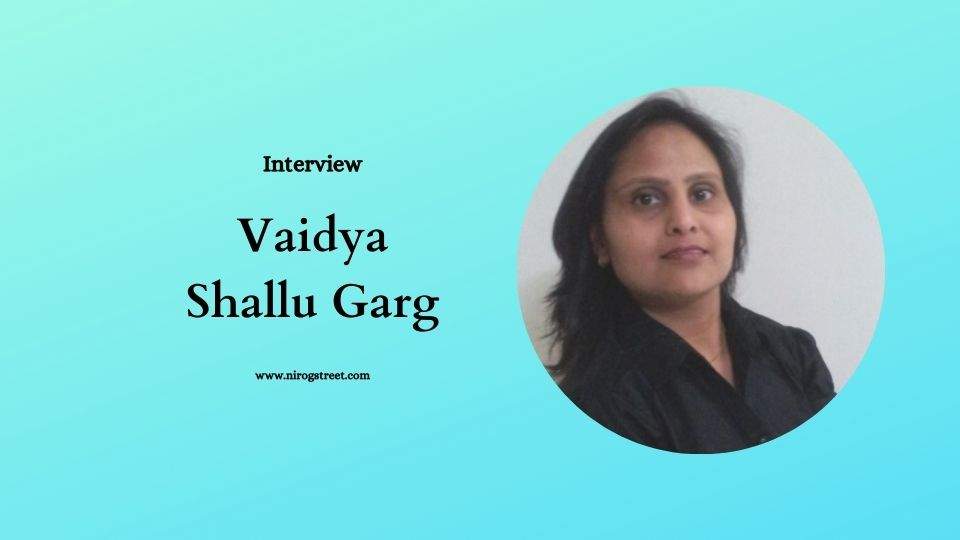 Dr. Shallu Garg has been practicing Ayurveda for over 18 years. As a doctor, it has been an insightful journey for her and an experience that has remained as enriching as it was at the beginning of her professional career. She is the founder of ayulife center that conducts authentic Panchakarma treatments and other therapies for treating several chronic diseases.

On choosing Ayurveda as a career

To help us understand how Ayurveda became an integral part of Dr. Garg’s life, she shares a personal anecdote: “During my childhood, my mother used to give me some home remedies for the common problems. At that time I never appreciated it. In 9th std., I got a severe stomach infection with diarrhea and vomiting. I had to be admitted to a hospital. There was hardly any visible relief even after three days. One day an old aunt came to see me and told my mother to try the powder made from some routine kitchen herbs. It worked like a miracle for me. An hour after taking that powder, I felt hungry and there was no diarrhea or vomiting. I was so surprised by this miraculous treatment and it initiated my interest in herbs.

Soon, my interest changed to my passion and as the years passed I joined an Ayurveda College to pursue my graduation.”

On her experience when it comes to treating patients, their trusting the treatment

“In my routine medical practice, I have observed that most of the ailments can be treated with a little change in the diet and lifestyle. This kind of treatment is mostly appreciated by patients and they themselves show interest in learning the few basic things so that they could heal themselves.

Sometimes some patients show reluctance to changing their lifestyle or diet as they want only medicines. So they need to be more convinced so that they are ready to adopt this way of treatment and when they see the results their trust automatically develops.”

On facing any challenges as a practitioner

“Of course, there are a lot of challenges I have to face during the routine. Like, people come for Ayurveda treatment when they get tired after visiting a number of specialists in modern medicine. They come with big files and instead of sharing their symptoms or history, they just ask for the treatment for the particular condition as pronounced in medical terminologies or investigations, which they learn from those medicos.”

Dr. Garg feels that these challenges will remain so until people start developing the faith in their own 5,000 years old system of Ayurveda and adapt it as the first level of treatment, a task toward which Nirogstreet itself is dedicated.

On any out of the ordinary situation while treating a patient

“It was quite a surprising incident when a patient visited me to seek remedy for her back pain and he was tired with the allopathic treatment he had taken so far. She had undergone quite many investigations. and unfortunately, nothing concrete could be found in the investigations. Moreover, she had a healthy lifestyle. it was sort of puzzling for her.

I gave her local treatments for 3-4 days and some other light supplements for gastritis. But she did not get the relief as it was expected. Then I told her to take rest from treatment and start consuming 1 tsp. of Triphala ghee. She came to me absolutely pain-free after 4 days.”

Dr. Garg says that such challenges come from time-to-time when the underlying problems are a little difficult to analyze on the first day. “But then, diseases can always be tricky and that is where authenticity and experience count the most,” she heartedly adds.

On traditional medicine as an effective cure

Dr. Garg implies that traditional medicines not only cure but also eradicate the root of the ailment if started at the early stage whenever the problem onsets. She explains that the founding belief of Ayurveda is in the treatment of the cause, instead of just suppressing the symptoms of the disease, an approach common in modern medicine and med-pathies. She also tells us that it is a myth that Ayurveda treatment is time-taking.

On the future of Ayurveda and Ayush

“Ayurveda has a wide scope today and in the future as well. It is not only used as an alternate system of medicine but it is the science of life. It helps people live a healthy life. people have started choosing Ayurveda treatments because they are facing the side effects of modern and foreign therapies. If Ayurveda is practiced with dedication and passion, there will always be great results without any doubt.”

How is technology impacting the industry

Dr. Garg believes that technology has been playing a major role in traditional medicine in recent years. According to her, it has helped in the following ways:

Treatment starts beforehand, even before the patient reaches the doctor. The doctor can get all the reports through high-speed bandwidth, social media sites like Facebook or WhatsApp, etc., analyze them, and can advise the patient remotely without the need for them to be present in person every time.

This perspective syncs well with how Nirogstreet is contributing to creating an avenue for a simple and convenient interaction between the doctor and the patient.

On hobbies outside her professional life

“Ayurveda is my passion. It has become my hobby. For instance, gossiping for me means a discussion on Ayurveda to create awareness about home treatments. I do free camp in Corporates, Schools, etc. to make Ayurveda the first line of treatment, so that people can live a healthy life. I spend my leisure time trying to find out easy solutions to treat routine problems. I do free blog writing for social sites. I also try to influence people with various routine examples.”

Her message to the people on Wellbeing

“I just want to say that it is not only a system of treatment but a way of a healthy life. Try to understand your body. Every person has their own individual body type. It does not mean that if something suits me then it can suit everyone. An individual is himself/herself the best consultant for his/her own body than anyone else. Try to go with nature and lead a healthful, prosperous life.”

Great cues to good health lie in her words.

[Dr. Shallu Garg graduated in B.A.M.S. (Bachelor in Ayurvedic medicine and surgery) from the prestigious Dayanand Ayurvedic College, Jalandhar (1993-1998). She has done her MD (AM) from the Indian Board of alternative medicines (Kolkata). She has worked with Medanta and several ngos. She organizes health camps, workshops, and sessions regularly.]