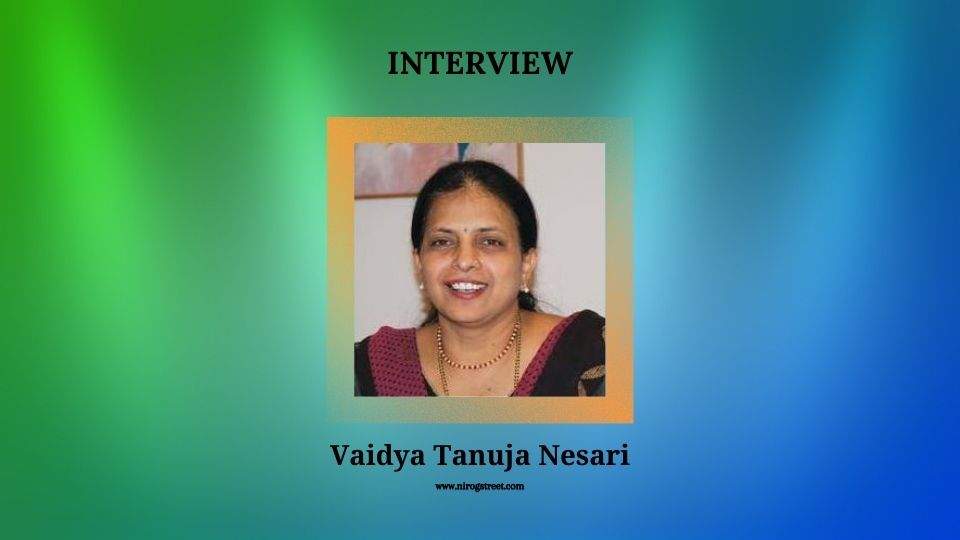 Prof. Dr. Tanuja Manoj Nesari is the director of All India Institute of Ayurveda, an autonomous organization under the Ministry of Ayush. An M.D. in Ayurveda and a PH.D. in Dravyaguna, Dr. Nesari is a seasoned researcher, professor, and expert on Ayurveda. Besides looking after the Ayurveda education and the growth of the students, she has also contributed to the overall propagation and advancement of Ayurveda significantly over the years.

Her lecture on October 27, 2013, on ‘role of Ayush in drafting a policy for National Urban Health Mission’ at the 15th International Conference on Ayurveda (Organized by the Rosenberg European Academy of Ayurveda, Germany, and the Dept. of Ayush) can be seen as the harbinger of a new era in the traditional medicine system.

Nirogstreet talked to her on International Women’s Day about the role of women leaders in Ayurveda. Read the conversation below.

Dr. Nesari, please tell us something about the history of Women Physicians in Ayurveda.

Women have played a major role in traditional health care since the very beginning. There are two things to consider when it comes to the significance of women physicians or women in general. First, a department like a mother and a child care always requires an active role of the women practitioners. Female Doctors are naturally more sympathetic and compassionate and it makes them far better at taking care of the health needs and appropriate medical supervision of the mothers and the babies.

Second, the fundamental goal of Ayurveda is the prevention of diseases and promotion of health. Diet, lifestyle, and sleep are the three pillars of healthy living. Women are in charge of the diet and hence the first criterion is automatically fulfilled. They instill good Samskaras in their children, introduce healthy habits to the family. In addition to all this, a mother is the role model for her child. She is profound Psychological support because of her kind and harmonious nature. She is the foundation of family health. Hence, the history of Ayurveda cannot be described without highlighting the direct and indirect roles women have delivered.

Also, Ayurveda speaks about the mental, physical, and social health of the people. Women are active contributors on all these levels. They help build healthy attitudes and behavior, which in turn makes a community of socially enthusiastic individuals. When a woman is empowered, it benefits everyone, be it the individual, the family, the society, or the community.

How do you see women’s contribution to Ayurveda today?

They have made an immense contribution. majority of the Ayurveda students today are females. In all specialties, women are more actively seeking Ayurveda education than the opposite gender does. If they have adopted it as their career choice today, it means they are the ones who are going to be an active changemaker tomorrow.

Indeed, Dr. Nesari. Do you agree that women would have a big role in making Ayurveda the first choice of treatment for mainstream society?

Of course, I do. Women can help you with your diet, lifestyle, attitude, code of conduct, and much more. They have been doing it for years as I said. As the matter of fact, their faith in Ayurveda is going to be a decisive factor in many ways for Ayurveda to reach and cure people as the first line of treatment.

Ayurveda is an effective medical system against all diseases. Diet and lifestyle, preventive care, etc. are invaluable wellness practices. Such guidelines are included in the National Health Policy 2017 too. the holistic approach of Ayurveda is the need of the hour.

That’s so true. Nirogstreet too strives toward a healthy and happy society. On the occasion of International Women’s Day today, what would be your message to women on wellbeing?

I’d say, be happy, Be healthy, be positive. Inculcate the 3CS - Communication, Confidence, & Courage. If we imbibe these values and skills, we’re going to achieve a healthy and successful life.

Read More► Ayurveda For Me Is Like An Inheritance Of The Family Tradition: Dr. Dhananjaya Sharma