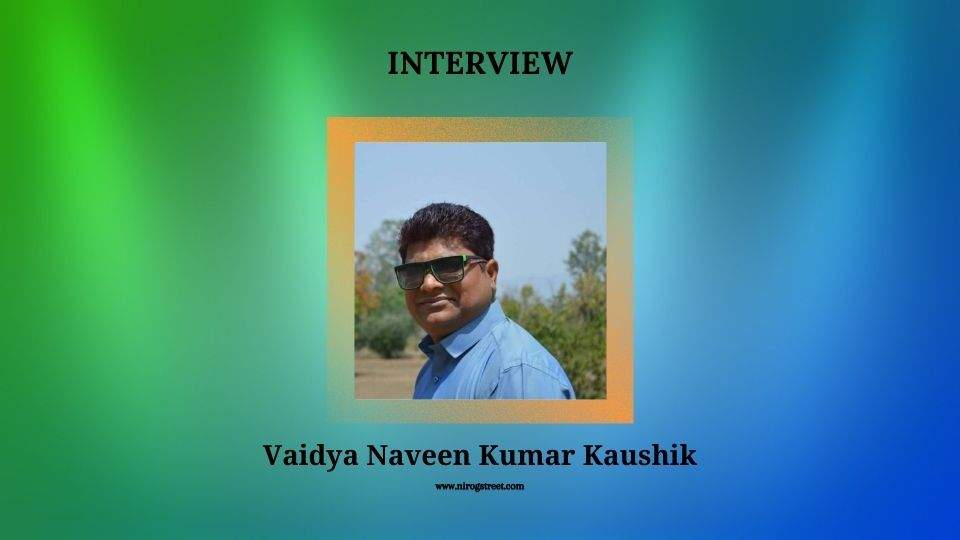 Dr. Naveen Kumar Kaushik is an Ayurveda practitioner based out of Bilaspur, Chhattisgarh. He practices from his Srijan Ayurveda Clinic. Having journeyed from being a less-confident Young Doctor to becoming an Ayurveda expert, Dr. Kaushik has not only witnessed his transformation but he talks about it candidly too. A true believer by nature, he is trained in the rare skill of Nadi Pariksha. Read his interview below.

Dr. Kaushik, please tell us about your educational background and professional qualification briefly.

I completed my B.A.M.S. from Amrutha Ayurvedic Medical College & Hospital (Rajiv Gandhi Health University, Bangalore) in 2009. I have a post-graduation in the master of social works.

Why did you choose Ayurvedic practices?

I did not come to Ayurveda straight away. I grew up studying away from home and my parents. I have a special liking for machinery. So, I naturally wanted to pursue engineering after my 10+2. My father and elder brother, however, wanted me to become an Allopathic Doctor. I even went abroad to study M.B.B.S. that was the year 2003. I wanted to finish as a pediatrician. But at the beginning itself, I was caught in a bout of severe food poisoning. I decided to return since there was not any healthy choice available for meals and it could have gone just worse. That was, in fact, a career-altering decision and fortunately, it brought me to studying Ayurveda.

What is your experience when it comes to treating patients? Do they trust the treatment?

It can be challenging. Patients have their own demands and expectations. Initially, I used to treat by mixing Allopathy and Ayurveda. Patients wanted quick recovery and it was quite hard to convince them about the benefits of Ayurveda. From 2012-14 I was in Bangalore associated with the art of living. I also underwent the Nadi Vaidya training. During that time I evolved as an Ayurveda practitioner. This helped me grow my confidence and faith in Ayurveda and as I came back to Bilaspur (Chhatisgarh), my hometown, I started my own set-up - Srijan Ayurvedic Clinic.

Any challenge that you face as a practitioner?

I’d say Ayurveda is a challenge in itself. You have to be very dedicated to understanding its concepts, principles, applications, etc. Young Doctors have to struggle more. Patients hesitate a lot. patients have to be franker and as a practitioner, you have to satisfy them by delivering the treatment well. The outcome of the treatment is highly important.

Any out of an ordinary situation that you have faced while treating a patient?

It happened so once that I advised some medicines to a patient. He complained that the medicines caused him complications. It ended up in arguments. Actually, it is a usual tactic and also a misunderstanding that you too must have seen being spread by the Allopathic Doctors who assume that Ayurveda treatment is bogus or unsafe and shrug the inefficacy of their treatment off upon our medicines.

How effective is traditional medicine as a cure?

I think except for surgery Ayurveda is complete in itself. We have not evolved much in terms of surgery. Ironically, Acharya Sushruta is called the father of modern surgery. We could not advance that further. If we look down into history, it seems that many Ayurveda texts were lost when king Ashoka got them burned down. Later on, the British occupation too pushed their own western medicine. A lot has to be done so that we can reinstate the reach and advantage of Ayurveda to people. It can be done only through spreading awareness, recording cases, sharing knowledge, and pursuing scientific research in Ayurveda, rigorously.

What do you think of Ayurveda’s future and its role in integrated medicine?

I think Ayurveda has a bright future. In my opinion, the new bill to introduce bridge course is not a well-thought move. The Young Doctors would tend to have a mindset partial to Allopathic medicines due to the various challenges that come from the patients as I explained earlier. It will also become a hindrance to developing self-confidence in practicing Ayurveda devotedly. You must not sail in two boats at the same time, as the old saying goes. You have to believe in yourself and have full faith in Ayurveda.

Do you think Nirogstreet is making a difference by striving to connect the mainstream society exclusively to Ayurveda practitioners through dedicated technology platforms?

I came to know about Nirogstreet just a few weeks back. I am glad that you people have started a project that is exclusively committed to Ayurveda. It is definitely going to go miles. I am sure Nirogstreet would create a great knowledge center for young practitioners. Whether it is the CMES, the nirogstreet for Ayurveda doctors App, or other initiatives and Events, Nirogstreet is indeed doing all the right things that demanded concentrated efforts for a long time.

Thank you for commending our efforts, Dr. Kaushik. Let's talk about your hobbies. How do you use your free time outside your professional life?

I am a spiritual person at the core. I like to explore new places. I seek balance and revival continuously.

What message would you like to convey to the people on Wellbeing?

I would say Aahaar, Nidra, Brahmacharya are the keys to healthy living. Salubrious lifestyle and a Nutritious Diet are important aspects of well-being. You have to watch your habits and follow a good routine. For consultation click on this link► Dr. Naveen Kumar Kaushik