Ayurveda For Me Is Like An Inheritance Of The Family Tradition: Dr. Dhananjaya Sharma 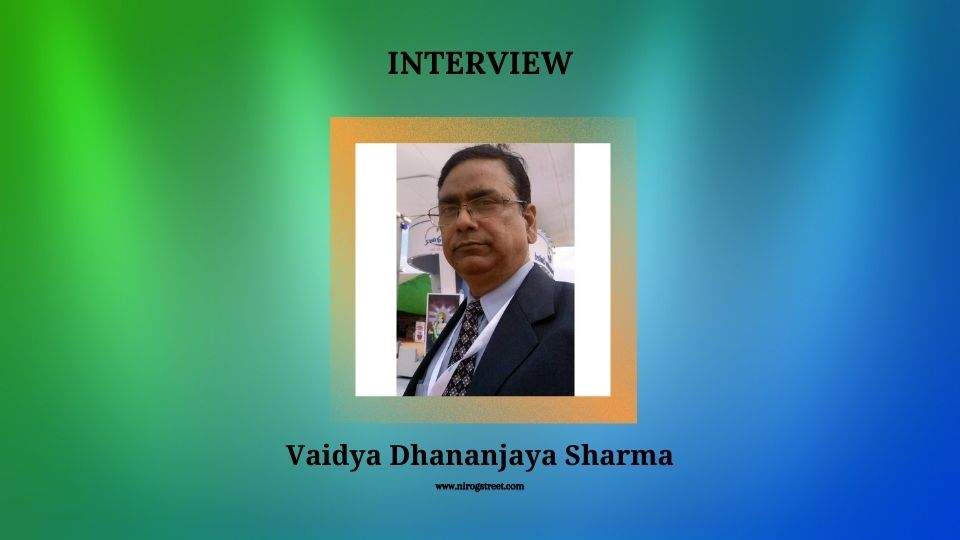 Dr. Dhananjaya Sharma is a well-known Ayurveda expert with an experience of over 28 years. He is deputed at CCIM, Bihar as the additional registrar. His passion for Ayurveda is an inspiration for the Young Doctors. Nirogstreet talked to him about his professional journey and the upcoming Ayurveda Parva in Patna.

Please tell us about your educational background and professional qualification briefly.

I completed my Bachelor in Ayurvedic Medicine & Surgery from Government Ayurvedic College & Hospital, Patna in 1990. I practiced for a couple of years after that and then I started working as Ayurvedic Medical Officer under the Bihar Government. In 2007, I came back to the Government Ayurvedic College & Hospital, as resident medical officer. Since 2014, I have been working as additional registrar at Ayurveda & Unani Chikitsa Parishad (CCIM, Bihar). I am also the president of Bihar Pradesh Ayurveda Sammelan.

Why did you choose Ayurvedic Practices?

Ayurveda for me is like an inheritance of the family tradition. I have been familiar with it since my early age. It came to me originally from my Grandfather, Vaidya Pandit Sudarshanacharya. He was appointed as the Vaidya by the Britishers in those times. My father too was an Ayurveda practitioner posted in the district municipality. Two of my brothers are Ayurvedic Doctors, while one is an M.B.B.S. Doctor (Pharmacology) working at RIMS (Rajendra Institute Of Medical Sciences), Ranchi, Jharkhand. It is obvious that I too grew a personal interest in Ayurveda.

What is your experience when it comes to treating patients? Do they trust the treatment?

In my long experience, I’ve realized that usually, the people who come to Ayurveda are patients who are tired of Allopathic medicines and more or less disappointed because of the ineffective modern treatment. My foremost instinct in such cases is to advise the patients to come to Ayurveda in the first place. I explain to them that Ayurveda is the only health science that can treat the patients even before any disease has occurred. Corrective measures in diet and lifestyle are the aspects of healthcare only. So, I convince and counsel my patients with appropriate patience. Of late, a slight shift can be noticed though. Quite a lot of patients I see these days are the ones who are adopting Ayurveda as their first choice of treatment. Ayurveda and Yoga can provide a resolution to all health problems.

Any challenge that you face as a practitioner?

The major challenge in practicing Ayurveda is that most of the patients who come to Ayurveda suffer from one chronic disease or another. They reach out in the hope of a cure. I accept this challenge. Besides, Ayurvedic medicines tend to be relatively expensive and it becomes a question of affordability for many patients. I try to keep the costs low for such patients. I have discussed this in seminars with my colleagues too. Unlike modern medicine, we don’t try to treat straight away with an antibiotic. What would you do if that fails to heal the patient? I prescribe Kashta Aushadhi and Resort to Ras Aushadhi only when it is really required.

Any out of ordinary situation that you have faced while treating a patient?

Yes, such complications keep happening once. You have to be careful and observant. I remember once a patient came to me with Ascites (Jalodar). I took his case history and found that he was alcoholic and there were serious problems related to liver and spleen. I gave him the treatment but it was taking time to get him well. He was poor and couldn’t bear the cost of the medications for long. The delay puzzled me somewhat and then I diagnosed him further to realize that tuberculosis (tb) was the real culprit slowing down the entire healing. Due to TB, his recovery was getting prolonged. So, I gave him a complete treatment with Gomutra and Punarnava Ark. I asked him to stop drinking normal water and gave him water too prepared with Punarnava. He finally got well.

How effective is traditional medicine as a cure?

It is highly effective, but there is a catch. Ayurvedic medicines are all about high quality, painstaking preparation, precise mixing, etc. The Shastras have perfect formulations laid down, but it’s up to you to be careful and accurate in that. Unless you follow it religiously, the effectiveness would be compromised.

What do you think of Ayurveda’s future and its role in integrated medicine?

I don’t think full-fledged integrated medicine is the right approach. Although it may bring in personal advantage, but would only harm the cause and essence of Ayurveda. I think it should only be allowed in health problems related to gynecology and surgery. We have proposed an amendment to the current approach and would request the authorities to consider it before implementing the final decision on it.

Ayurveda has a bright future and there’s no shred of doubt about it. Its advantages are being acclaimed and popularized in all corners of the world, especially the Panchakarma. People from all part of the world come to specialized locations such as Utkal, Kerala, Delhi, etc. To avail this health therapy.

The Government is also doing a lot for promoting Ayurveda. We are thankful to our honorable prime minister for accelerating the Global Propagation of Ayurveda and introducing concrete plans and projects, such as establishing institutions like Ayurveda AIIMS in states, Ayushman, Ayurveda Parv, etc.

Dr. Sharma, since you mentioned it, please tell us about the upcoming Ayurveda Parv in Patna?

Ayurveda Parv is an initiative by the Ayush Ministry to increase the awareness and reach of Ayurveda in the society. It has four objectives: 1) To conduct seminars for students in order to enlighten them about prospects and application of Ayurveda. 2) To hold public lectures for educating the masses on diabetes and pain management, the two of which have been identified as major health risks in the recent times. 3) Free Health Clinics so that the public can benefit immediately. 4) Free medicines in Health Camps.

We’re organizing the last Ayurveda Parva of this season at Gyan Bhawan, Gandhi Maidan, Patna from March 16-18. We’re expecting over 1500 delegates. Dignitaries like the state CM, the Health Minister of Bihar, Honorable Ayush Minister, Secretary Ayush, Adviser (AY.) too would be attending the Parva.

Do you think Nirogstreet is making a difference by striving to connect the mainstream society exclusively to Ayurveda practitioners through dedicated technology platforms?

Of course. Nirogstreet is doing an excellent job in the field of Ayurveda. It is heartening to see that people from outside the industry are taking an active interest in making Ayurveda the first and best health choice of people. We’re thankful to you for having such a commitment. It is most needed at the time. I’d urge Nirogstreet be part of all the Ayurveda-related events across the world, including Ayurveda Parva. Cooperating together we can take Ayurveda and its benefits everywhere.

Any hobbies or activities you engage in, outside your professional life?

Ayurveda is my main hobby. I keep striving to create awareness about Ayurveda and spread its reach. My daughter is also in Ayurveda. It is the way of life and a spiritual dimension too.

What message would you like to convey to the people on Wellbeing?

I’d tell the people to take care of their Aahar and Vihaar. Timely and balanced amount of diet is important. Avoid wrong combination of foods, such as milk and salt. Follow Nitya Kriya (morning ablution) early morning. Don’t sleep during the daytime. adopt yoga, meditation, and exercises in daily routine.

Read More► I Am A Health Warrior In The United States: Mary Bruck