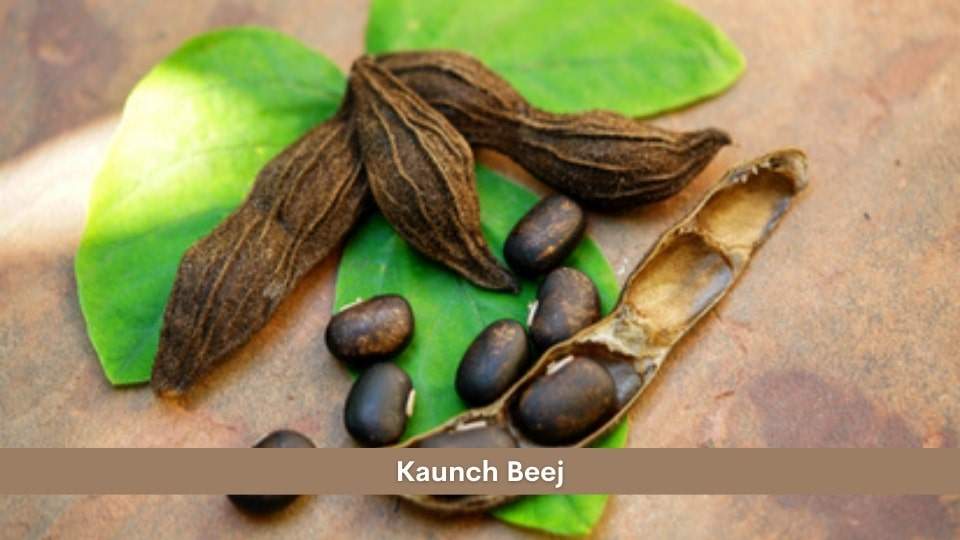 Cowhage or Kaunch beej is a tropical leguminous plant which is native to Africa and tropical Asia. As it is a legume, it fixes nitrogen and provides fertilization. It is also known as "The magic velvet bean," as it possesses many medicinal qualities.

It is traditionally used in Unani Medicine culture as well as in Ayurvedic Medicinal science. The most famous traditional use of this plant extract is to prevent toxic effects for various snake bites.

It is a good source of protein. Kaunch beej powder has an aphrodisiac property that helps in sexual weakness, increases sperm and semen production, and improves quality. In modern science, it is researched that Kaunch beej contains L-dopa, which is very useful in treating Parkinson's disease, as the L-dopa gets converted into dopamine. It restores the reduced levels of dopamine in Parkinson's disease. This property also increases body energy. Kaunch beej also has some hormonal activity related to prolactin, which reduces the chances of breast cancer.

But it is notorious for its irrigational nature because direct contact with the hair of the Kaunch beej pod or the seed itself can cause itching and rashes. Kaunch beej is known for different names like Mucunapruriens (scientific name), kaucha, Nasugunne, cowhage, Poonaikkali, BanarKakua, etc.

• Kaunch beej is for Arthritis

• Managing a high level of prolactin

Prolactin is an essential hormone produced in the lactation period. It helps to produce milk. But if prolactin levels rise too high, that can cause other problems and increase the risk of breast cancer. Kaunch beej helps manage high prolactin levels as it contains L-dopa; L-dopa prevents prolactin hormone overproduction.

It also prevents the growth of cancerous cells by damaging their DNA, causing apoptosis in these cells. Thus Kaunch beej reduces high prolactin levels and prevents or lower the risk of breast cancer.

Kaunch beej possesses Ropan or healing property as well as antiseptic property. Kaunch beej powder is used in insect bite as it prevents infection and promotes healing of the wound. It also an anti-inflammatory agent, so the external use of Kaunch beej manages any swelling due to insect bite.

Kaunch beej powder is prepared by mixing ½ - 1 teaspoon of Kaunch beej powder with milk. The paste is then applied to that affected area and leave it there until symptoms subside. Wash the area with water after use.

Kaunch beej powder producesa quick healing effect on the wound. It also decreases swelling and helps to bring back the normal texture of the skin. This is due to the Kaunch beej possesses ropan or healing property as well as anti-inflammatory property.

Forms of Kaunch beej in Ayurveda with Recommended Dosage

Kaunch beej churna or Kaunch beej powder is the most common form, which is used as a medicine or food supplement. In its raw form, it is very potent or Ushna and can cause digestive and skin problems. That’s why it is used with honey or milk to reduce its Ushna.

a. Kaunch beej powder with honey

¼ - ½ teaspoon of Kaunch beej powder is mixed with a little bit of honey. Have this mixture after meals. This process is not recommended for diabetic patients.

b. Kaunch beej powder with milk

¼ - ½ teaspoon of Kaunch beej powder is mixed with one cup of milk and boiled for 3 – 5 minutes. Drink this twice a day after having lunch and dinner.

Kaunch beej powder is also available in capsule form. Generally, one capsule twice a day after lunch or dinner is prescribed.

Kaunch beej paste is used for wound healing purposes. ½ - 1 teaspoon of Kaunch beej powder is mixed with milk to make a paste-like consistency. Apply the paste to the wounded region and let it dry. After that, wash it thoroughly with fresh water and repeat this remedy several times to have quick healing.

Kaunch beej tablets are also available as an Ayurvedic food supplement. Taking one tablet twice a day after having lunch and dinner is recommended.

• In the case of digestion

Kaunch beej reduces prolactin level, which is an important hormone for the production of milk. So consulting a doctor is very important in this condition.

Kaunch beej is very potent and can create hormonal imbalance in a pregnant woman. So it is very important to consult a doctor before using Kaunch beej during pregnancy time and even after pregnancy.

Kaunch beej contains L-dopa, which gets converted into dopamine inside the body. This property can cause interaction and alteration in several CNS drug's functionalities. So, it is recommended to consult a doctor before taking Kaunch beej with CNS drugs.

Kaunch beej can cause headaches, confusion, agitation, hallucination. It also causes itching, burning, and swelling to the skin.

1. Is it safe to consume Kaunch beej powder with milk?

2. Is Kaunch beej safe for a woman?

Kaunch beej is very helpful in balancing all three doshas. It is especially a great vata balancer and helps reduce joint pain, so Kaunch beej is good for women's health. But there are some precautions during pregnancy and breastfeeding, so it is best to consult a doctor before consuming Kaunch beej in those times.

¼ -1/2 teaspoon of Kaunch beej powder is mixed with honey. It is taken after lunch or dinner.

¼ - ½ teaspoon of this powder is mixed with one cup of warm milk or mix it earlier and then boil it for 3 – 5 minutes. Add sugar accordingly, and take it once or twice a day after having meals.

The recommended dosage is one capsule at a time twice a day; swallow it with water after meals.

Take one Kaunch beej tablet after meals, twice a day. Swallow it with water.

4. What is the Ayurvedic preparation for Kaunch beej for enhancing stamina?

To enhance overall stamina and body strength, a mixture of Kaunch beej powder, Ashwagandha powder, and Shatavari powder is taken as a food supplement. Taking this powder with milk yields better results.

5. What are the different ways of consuming Kaunch beej powder?

¼ - ½ teaspoons of Kaunch beej powder is mixed with lukewarm milk or mix it and boil it for 3 – 5 minutes. Consume it twice a day after lunch and dinner.

Kaunch Pak is nothing but an Ayurvedic preparation which is prepared from Kaunch beej powder. It is a food supplement that improves sexual stamina. It also enhances the body's immunity power, which helps to fight against infection or other diseases. It is generally prescribed to take 1 teaspoon of Kaunch Pak with warm milk once or twice a day after meals.

7. Is Kaunch beej has aphrodisiac quality?

8. Is Kaunch beej is useful in diabetes?

9. Can we use Kaunch beej against snake venom?

Yes, snake venom can provide anti-toxic activity in snake venom poisoning. Kaunch beej acts as prophylaxis, which prevents the action of snake venom. It basically enhances the immune response of the body and stimulates the production of antibodies. These antibodies then bind to the snake venom protein and neutralize it. So, Kaunch beej produces an overall fighting mechanism to prevent the toxic effects of snake venom.

Testosterone is produced by the Leydig’s cells in testes by the influence of FSH (follicle-stimulating hormone) and LH (luteinizing hormone). Kaunch beej contains L-dopa, which stimulates the secretion of GnRH (gonadotropin-releasing hormone). The GnRH ultimately activates the pituitary gland and secrets FSH and LH, and the increased levels of these two hormones increase the production of testosterone.

12. Is Kaunch beej is a stress reliever?

Stress is caused by an increased level of cortisol hormone in the blood, and this further stimulates the release of ACTH (adrenocorticotropic hormone), which then increases the production of cortisol (stress hormone). Kaunch beej is an antioxidant which helps to decrease these high levels of cortisol and thus reduces stress.

13. How Kaunch beej helps to increase energy levels in the body?

Kaunch beej is Guru (heavy), and it also Balaya in nature, which helps to provide strength. Consuming Kaunch beej also helps to strengthen the digestive system. All these qualities together help to gain weight.

¼ - ½ teaspoon of Kaunch beej powder mixed with milk is taken once or twice a day to achieve effective results.

16. Is it safe to use Kaunch beej directly on the skin?

It is better to consult a doctor before using Kaunch beej directly to the skin, as it is ushna or hot and can cause several skin problems. Especially the outer shell of Kaunch beej can cause skin irritation, itching, and burning sensation, so it is better to avoid direct contact.