Naturopathy As A Tending to Future Health-Care System 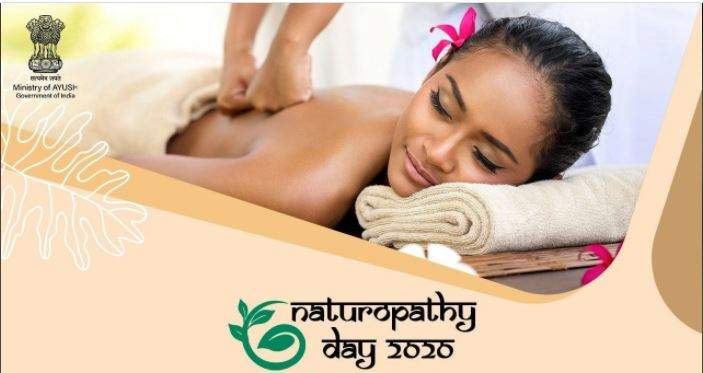 Naturopathy is a system of health care that promotes the body's own self-healing mechanism. It uses natural therapies such as Herbal Medicine, Nutrition, Acupuncture, Hydrotherapy, Homeopathy, Physical manipulations, Hydrotherapy, Exercise, Fasting, and other modalities, in accordance with Naturopathic Principles. The growing realization of Naturopathy as tending to the future system of healthcare and the evergreen relevance of Gandhian thoughts on health were the two themes that dominated the activities of contemplation of Naturopathy Day, 2020. The virtual program was graced by Union AYUSH Minister, Shri Shripad Yesso Naik, Vaidya Rajesh Kotecha, Secretary (AYUSH), Vice Chairman of UGC, Dr. BhushanPatwardhan, and other noted figures.

Naturopathy Day is celebrated every year in the country on 18th November, the day on which Mahatma Gandhi become a Life Member of the Nature Cure Foundation Trust and signed the deed. Gandhiji is contemplated the founding figure of Naturopathy in India, as it was largely through his attempts that this practice which originated in Europe became popular in India.

The opening of the two-day observation of 3rdNaturopathy Day was done by the Central Council for Research in Yoga & Naturopathy (CCRYN), through a well-attended e-event. In his oration at the inauguration, Shri Naik recalled the concepts of Mahatma Gandhi on health and its importance in the national mainstream. He said that Bapu’s words were true even today especially in times of Covid-19 where personal hygiene, sanitation, diet, and lifestyle are of utmost importance in its prevention. The Minister noticed that a large number of patients are drawn to Naturopathy centers and stimulated CCRYN to start collaborative research with these institutions. He also noted CCRYN’s attempts to start Mind-Body Medicine centers in reputed institutes like AIIMS and PGIs across the country. Vaidya Rajesh Kotecha, Secretary (AYUSH), in his speech highlighted some of the ongoing and forthcoming attempts of the Ministry for promotion of Naturopathy, which included attempts to put in place a regulating mechanism and to raise high-quality educational institutions.

National Institute of Naturopathy (NIN), Pune also organized a high-profile e-event. NIN encourages the concept of vitality in the context of the pandemic by organizing across the country a series of events spread over three days in association with Yoga and Premier Naturopathy Hospitals, Naturopathy Medical Colleges, and Clinics. The themes selected for these events were Jan Andolan against Covid-19, AYUSH for Nurturing vitality, and Immunity through Naturopathy.

The National Institute of Naturopathy organized a mega-series of 48 webinars over 48 days starting from 2nd October 2020 which culminated on Naturopathy Day. The reason for the webinars was to sensitize health care professionals about the comprehensiveness of Mahatma Gandhi’s insights on health and different aspects of Health determinants. The webinars were organized in association with various Gandhian Institutes like Gandhi Research Foundation Centre for Gandhian Studies, Gandhi Bhavan, Gandhi Smarak Nidhi, etc. Renowned orators from all over the world delivered lectures in this mega-series.

Naturopathy and its focus on self-responsibility in the cases of health in finding new adherents globally. The growing opportunities for Naturopathy to cooperate with other healthcare systems through various National and International Institutions were touched upon by different speakers on the occasion.

Vaidya Rajesh Kotecha, Secretary, Ministry of AYUSH extended his good wishes to all Naturopaths across the country on the occasion and emphasized the importance of the upcoming Nisarg Gram Project to carry out innovatory work and to explore the probability of integration of Naturopathy with other AYUSH systems.

Minister of AYUSH, Shri Shripad Yesso Naik joined the e-event through a video message and appreciated the efforts of NIN in the last year, including their Tribal project started at GoheBudruk, Pune. He said that such preludes are needed for tapping the potential of Naturopathy to facilitate better health and over-all development of the people in the remote areas of the country.

Vice-Chairman of UGC, Dr. Bhushan Patwardhan called upon Naturopaths of the country to create a Bharat model of Naturopathy with a gigantic vision. A multidisciplinary approach would be very much in order. The future will be the period of Physiology, not Pathology. Health through Medicine is obscure and Health in the coming years will be more guileless on Naturopathy. Without a core modification in the mindset of people, the planet will be sicker and sicker day by day. Therefore, the modernization of a new model of Naturopathy cure is the demand of the day, along with its integration with other modern science. (PIB)