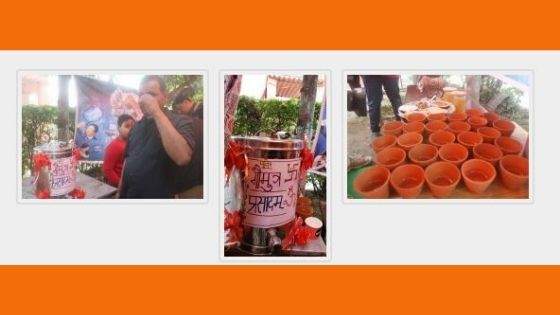 Spoonfuls of desi ghee dripping into fire could have brought some warmth to media teams caught in the sudden hailstorm in Delhi, but the whole idea was strange. A saffron clad, self-proclaimed saint of a breakaway faction of the Hindu Mahasabha, Chakrapani, was making a public spectacle of keeping "peace" with coronavirus.

"Log bolte hai, 'Go Corona go'. Mai aisa nahi bolta. Mai sanatan dharm me vishwas karta hun. Mai kehta hun, wo bahar se aye hai. Puri, kheer khilake shant karo aur wapas bhejo (people say, 'Go corona go'. I don't say so. I am a firm beliver in sanatan dharma. Corona has come from outside. I insist we offer it 'puri' and 'kheer' so that we can calm it down and thus we send it off)," he told IANS.

Chakrapani held a much-publicised 'gomutra party' on Saturday at its office at Mandir Marg, where there was a 'havan', 'drinking cow urine' and assorted food -- the 'gomutra party' he called it.

Why 'gomutra'? "Drinking it can help us fight coronavirus. We must drink it," he said.

Across the world, there are more than 5,000 deaths due to the deadly virus. The World Health Organisation has declared it a 'pandemic'. Back home in India where there are 81 active cases and 2 casualties, the Home Ministry announced it as a 'disaster'. In Delhi, where Chakrapani held the 'party', the state government has shut schools, theatres to avoid mass congregation. But that doesn't stop Chakrapani, who calls himself a 'Swami,' to take it to a frivolous level.

"These days, we see so many wine shops at airports. I demand from the Centre that all these shops be closed immediately and 'gomutra' shops be opened instead," he said.

Chakrapani went on to demand that all incoming passengers at airport from international destinations must be made to drink cow urine. He believes that 'gomutra' is an antidote to the virus at a time when the entire world is at its wits' end.