The Best Treatment for COPD 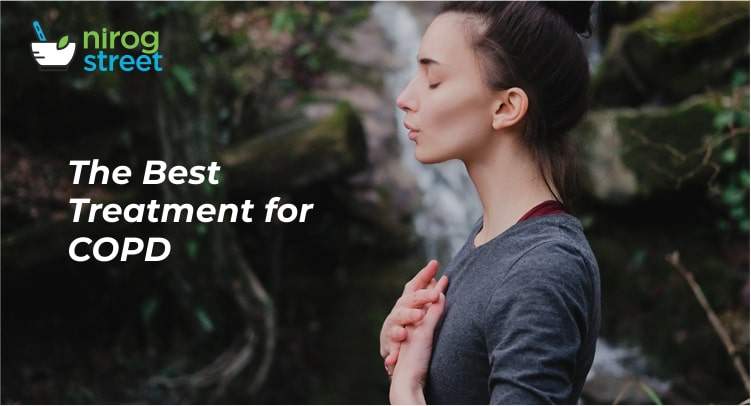 If you have been coughing for a long time and have trouble breathing? So you should not ignore this problem. It can be a chronic obstructive pulmonary disorder. Chronic obstructive pulmonary disease(COPD) is a group of diseases in which the patient has difficulty breathing. In this, the patient has a persistent cough, such as a smoker. So, here you will know the symptoms, causes & risk factors, stage, prevention, and treatment of COPD. You will get to know some Ayurvedic remedies that will help to deal with COPD.

Chronic bronchitis is an inflammation of your bronchial tubes, these bronchial tubes carry air to your lungs. Emphysema occurs when the sac (bronchial) formed by the smallest air fraction of the lungs is slowly destroyed. Chronic obstructive pulmonary disease cannot relieve damage to your lungs, but its treatment helps control symptoms and reduce further damage.

Symptoms of COPD
Breathing becomes difficult when there is a chronic obstructive pulmonary disease (COPD). But this problem develops slowly over many years and in this, you do not understand how long you have been with this disease. Most people with COPD do not know the common symptoms of this problem until they reach 40 to 50 years of age.

Common symptoms of COPD include: -
• Breathing fast can happen while exercising, and sometimes even if you wake up suddenly at night, you may feel difficulty in breathing
• Constant cough with mucus, which is not easily cured
• Having a chest infection
• Constant sore throat
• chest tightness
• In this, every day you need to clean the mucus from the lungs
• A persistent cold, flu, or other respiratory infections
• Weakness

COPD Causes & Risk Factors
Causes
• In most of the cases, due to increased COPD due to cigarette smoking, the lungs get worse.
• Among other reasons, there is a risk of houses not being ventilated and the smoke generated by cooking and burning anything.
• Due to genetic reasons.

How do your lungs get affected by this problem?
Air travels through your breathing tube and two large tubes to the lungs. The bronchiole tubes inside your lungs are divided into smaller branches at times like the branches of a tree. At the other end of which there is a group of small airbags called alveoli.

These airbags have very thin walls, which are filled with many small blood vessels (capillaries).

In the case of COPD, it is difficult to know the flow of air from the airways inside the body and come out. Which can be due to the following reasons: -

• When this happens, these airways and airbags lose their elasticity. Because of this, when you exhale, some part of the air gets trapped in your lungs.
• The walls between the airbags are destroyed.
• Airway walls thick and dry.
• Excessive phlegm in the airways and blockage of airways.

Airway obstructions also include these reasons: -
Emphysema:
Lung disease is a condition caused by the fragile walls of small airbags in the lungs and the loss of flexibility of small airbags (alveoli). In this, the air is destroyed while coming out of the lungs.

Chronic bronchitis:
In this condition, there is inflammation in your bronchial tube and it shrinks. This causes more mucus to form in your lungs, which may later block your narrowed tubes. During this, your chronic cough may also increase while trying to clear the airways.

When does the risk of COPD increase?
• Excess tobacco and smoking. The most important risk factors for COPD include prolonged cigarette smoking or bidi smoking. Apart from this, a large number of people smoke cigarettes and bidis around the zine, they are also at greater risk of getting this problem from exposure to this smoke.
• Smokers are at a higher risk of this problem even when they have asthma. The conjunction of asthma and smoking enhances the risk of COPD.
• Exposure to dust and chemicals. Exposure to chemical fumes and dust in the workplace for many days can increase your lung irritation and many other troubles.
• Exposure to smoke resulting from the burning of any kind of fuel. Non-ventilation of homes and exposure to smoke emitted during cooking in the home also poses a risk of COPD.
• COPD evolves moderately over many years, so most people show symptoms only after at least 40 years.

How Many Types of COPD
3 types of COPD:
Refractory Asthma: This type may also be called nonreversible. It doesn't respond to common asthma prescriptions.
Chronic Bronchitis: While you have shortness of breath, coughing, and mucus that lingers at least 3 months for 2 years in a row.
Emphysema: Damage to air sacs in your lungs leaves you short of breath.

Stages of COPD
The stages of COPD are:
• Mild- Your airflow is moderately limited, but you don’t notice it much. You cough and have excretion every once in a while.

• Moderate- Your airflow is worse. You’re often low in breath after doing something active. This is the point where most people notice symptoms and get help.

• Severe- Your airflow and conciseness of breath are more critical. You can't do normal exercise anymore. Your symptoms flare up repeatedly, also called an exacerbation.

• Very severe- Your airflow is limited, your flares are more frequent and intense, and your quality of life is poor.

Prevention of COPD
• Avoid air pollution.
• Avoid risks in the working space. Protect yourself as much as possible from exposure to chemical fumes and dust in the workplace.
• A healthy lifestyle habit helps to keep your lungs healthy.
• Do not smoke The obvious cause of COPD is an obstruction in the pathway of breathing. Most of the cases are caused by smoking cigarettes or bidis, so if you want to stop COPD, stop smoking immediately.
• If someone is smoking near you, then get away from it, its smoke can also be dangerous for you.

Diet to Eat
• Low-fat protein-rich diets like meat thin pieces, poultry, and fish.
• Whole-grain foods such as whole-grain bread, bran, brown rice, and oats. These foods are rich in fiber, which helps in improving the functioning of the digestive system.
• Fresh fruits and vegetables contain essential vitamins, minerals, and fiber, which help to keep your body healthy.
• Foods that have high potassium levels include oranges, tomatoes, asparagus, and potatoes.

Yoga and Exercise
• Walking is one of the best ways to exercise.
• Stretching- Stretching gives you relaxation and increases your flexibility. It is also good for warm-up before starting exercise and later for peace and relaxation.
• Aerobic exercise- Aerobic exercise increases the smoothness of the heart and related systems, and makes your body more efficient to use oxygen. Swimming, walking, climbing stairs, and dancing are all good aerobic exercises.
• Resistive training- Exercising with light weights is the proper way to increase strength and stamina.

Home Remedies
• Do not take things that stimulate your lungs such as smoke and air pollution.
• Exercise regularly to stay as strong as possible.
• Take a proper diet to maintain your strength.

Q. Can people with COPD get better?
Ans. Chronic obstructive pulmonary disorder makes it frequently challenging for a person to breathe. It is not currently possible to treat or modify the situation completely, but a person can decrease its effect by making some cure and lifestyle changes.

Q. What does a COPD attack feel like?
Ans. Symptoms of a COPD flare are shortness or breathlessness of breath. Either feeling like you can't breathe deeply or gasping for air. Enhances in coughing attacks.

Q. What is the 6-minute walk test for COPD?
Ans. During this test, you walk at your normal pace for six minutes. This test can be used to monitor your response to cure for lung, heart, and other health issues. This test is normally used for people with pulmonary hypertension, interstitial lung disease, pre-lung transplant evaluation, or COPD.

Q. What color is phlegm with COPD?
Ans. The color of the mucus in people with COPD can be a crucial sign. Most of the time mucus is clear or gray-colored, although some people with chronic bronchitis will have a chronic cough with pale yellow mucus.

Q. Is walking good for COPD?
Ans. Walking is a safe and efficient form of exercise for nearly everyone, including people living with the chronic obstructive pulmonary disorder (COPD).