How To Cure Psoriasis? 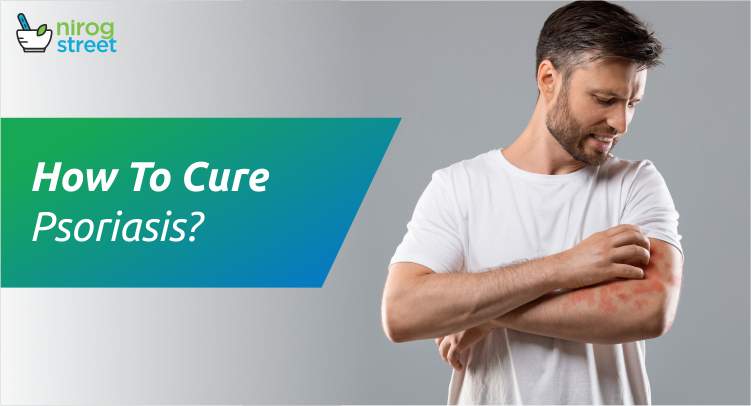 According to ancient science Ayurveda, psoriasis occurs due to an imbalance of and phlegm air. Psoriasis can't be passed from one to another. It does happen sometimes in members of the same family. If you want to get rid of psoriasis, then you have to do a cure for psoriasis.

Psoriasis usually becomes visible in early adulthood. For most people, it affects just a few areas of the body. So here you get to know how to cure psoriasis and it helps you to deal with psoriasis.

In serious cases, psoriasis can cover large parts of the body. Symptoms of Psoriasis often start between the age of 15 and 25 but can start at any age. Children, men, and women of all skin colors can get psoriasis.

Psoriasis is a skin disease, better known as skin asthma. Skin cells grow very fast in this. In this, a coat is formed on the top layer of the skin and it peels off. This causes white spots and causes dryness in the skin. The skin becomes reddish due to itching and wounds are formed in it. Psoriasis is often caused by emotional stress or trauma, even though there are other reasons.

Inflammation caused by psoriasis can affect other tissues and organs in the body. People who face psoriasis may also experience other health conditions. One of three people with psoriasis can also develop psoriatic arthritis.

The problem of psoriasis can be due to these causes: -

The weakness of immunity: When the body's immune power becomes weak, new cells start forming rapidly. This skin is so weak that it deteriorates even before it is made. Red rash and rashes appear in it.

Infection: Sometimes viral or bacterial infection also causes this disease. If you are suffering from skin infections other than the throat, they can suffer from psoriasis. If someone in your home is suffering from this disease, then you may also have this problem.

Other causes of psoriasis: Any skin lesion such as skin biting, bee biting, or sun scorching. It can cause psoriasis. Stress, smoking, and excessive alcohol consumption can also cause psoriasis. This disease also occurs due to a lack of vitamin D in the body and eating some medicines related to high blood pressure.

- Patches or rashes of red, inflamed skin, often covered with loose, the plaques will grow and merge into one another, silver-colored scales in severe cases, covering large areas.

- Bleeding of small areas where the involved skin is scraped.

- Painful, itchy skin that can bleed or crack.

- Problems with your toenails and fingernails, including discoloration and pitting the nails may also begin to kibble or separate from the nail bed.

- Scaly plaques on the scalp.

Guttate Psoriasis: It appears in small red spots on the skin. It’s the 2nd most common type, it’s affecting around 8% of people who have psoriasis. Most of the time it starts in terms of childhood or young adulthood.

Flexural or Inverse Psoriasis: It often seems in skinfolds, such as under the breasts or in the armpits or groin area. This type of psoriasis is reddish and often shiny and smooth.

Plaque or Vulgaris Psoriasis: It is the most simple form of psoriasis. An estimated 80% to 90% of people with psoriasis have plaque psoriasis. It is characterized by thick red patches of skin, often with a white or silver scaly layer.

Erythrodermic or Exfoliative Psoriasis: It is a rare type of psoriasis that looks like severe burns. The condition is dangerous and can be a medical emergency. You may need hospitalization because your body may not be able to control your body temperature.

Pustular Psoriasis: It is a serious form of psoriasis. It grows fast in the form of many white pustules nearby red skin. Pustular psoriasis can affect isolated areas of the body, like the hands and feet, or cover most of the skin’s surface. These pustules may also join together and form scaling.

If you are dealing with psoriasis and you need a cure for psoriasis, you can take medication, your stress level, keep close tabs on the weather, and other triggers. You should watch what's on your plate. If you have psoriasis so for that you may focus on psoriasis treatment diet it may help you to fight with psoriasis. What you eat and drink that can make a difference.

If you have a problem with psoriasis then the best psoriasis treatment diets are:

Healthy Fats: fatty fish like salmon, herring, tuna, sardines, walnuts, almonds, peanuts, nut butter, flaxseeds, pumpkin seeds, trout, sunflower seeds, and chia seeds In addition to eating the foods we have mentioned, taking the nutritional supplements may help in your psoriasis symptoms and overall health. Psoriasis has been linked to vitamin deficiencies, so it can be a good idea to concern supplements with your doctor.

If you are suffering from psoriasis and you are seeking a good cure for psoriasis, then note that you have stock of medicines related to psoriasis. If you need, ask for additional medicine. You can do a consultation with an Ayurveda doctor related to the cure of psoriasis. You need to pay attention that you take the medicine with the advice of a doctor and do not discontinue the medicine without their advice.

Read More > Causes of Psoriasis in Winters and It's Ayurvedic Treatment