How to cure depression by Ayurveda? 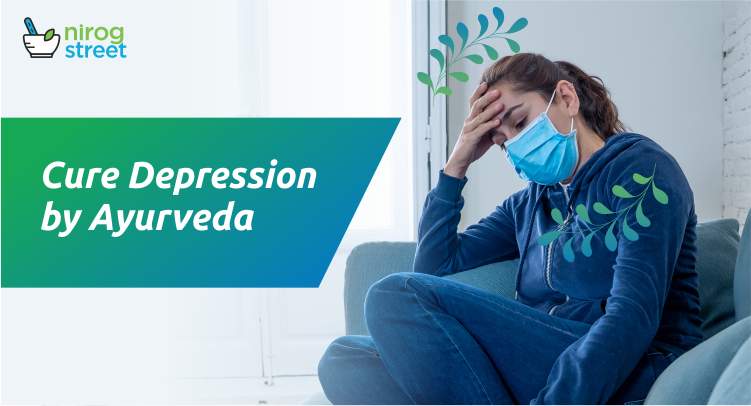 Depression is a state of mind that can push down the courage of the person to the worst levels. Depression might have arisen in life due to different reasons. But, there are so many people who don’t know how they can cure depression. However, the depressed state can be highly troubling and can steal balance, peace, and clear cognition forcing people into the door of confusion.

Therefore it is better that you take help from the divine by evoking the divine through the exact mantras. This mantra is so energetic and impressive in relieving depression and giving back the lost confidence.

According to the report published on the India Today website, India is the world's most depressed country, which means that most people suffer from depression.
About 6.5 percent of India's population suffers from depression, of which about 10.9 people commit suicide per lakh people. This is due to the lack of knowledge of mental illness, which all people should try to overcome. This thing also applies to depression, so we decided to write this article so that people can get the necessary information related to depression. Here we mention explanations, causes, symptoms, and how to cure depression by Ayurvedic herbal remedies.

What is Depression?
Depression refers to a mental illness in which a person feels lonely, depressed, etc. It is mainly associated with a mood disorder, which affects one's thinking, memory, behavior, etc.

Causes of Depression
Depression can occur to anyone of any age, which may have different reasons. Despite this, depression can usually be the result of the following reasons:
Exploitation- Exploitation is the major cause of depression. Thus, this problem is more likely to occur mainly in people with physical abuse.
Consumption of any kind of medicine- Often, depression is also the result of side-effects of medicine. Therefore, if a person is undergoing any kind of treatment, then he should consume the medicine in a limited form so that he does not face any side-effects.
The dispute in the family- You must have heard that the impact of the home environment has a deep impact on children and other family members. If there is a lot of quarrels in a family, the mental health of its members can be adversely affected and they may become victims of depression.
Death of a loved one- It is very painful for any one of us to lose our loved ones. It affects our life as well as mental health, which results in many mental illnesses. Similar diseases include depression, which psychologists have to resort to in order to get out.
Genetic cause- Another cause of depression is genetic. Thus, if another member of a person's family is suffering from depression, he/she may also develop the disease.

Staying depressed- If a person feels very depressed, then he should not avoid it but should inform the psychologist. Since feeling depressed all the time is a symptom of depression, there is a dire need for treatment.

Trouble concentrating- If a person faces a problem while concentrating on something, he or she should seek a doctor for a cure immediately as it may be a sign of mental illness such as depression.

Feeling of weakness- Any mental disease starts with physical ability, which means that its symptoms first appear on the human body.
This also applies to depression because people feel very weak in it.

How to cure the depression by Ayurvedic herbal remedies
Some Ayurvedic herbs and spices can help lessen the symptoms of depression. An Ayurvedic expert recommends some herbal remedies for depression.
According to the World Health Organization (WHO), depression is the leading source of ill health and disability worldwide. The panic of stigma and lack of support for people with mental problems have known to be the biggest causes of not being able to get the right cure.
If you don’t know, we explain to you how to get rid of depression. Ayurvedic herbs can make it easier in making healthy again your body in more ways than one.
Ayurvedic herbal remedies for depression are here:
1. Maca (Peruvian Ginseng)
Maca so-called Peruvian ginseng is a herb that is power-packed with nutrients. It is a source of vitamins, various minerals, amino acids, and phytonutrients that make greater stamina and lesser excessive anxiety. A Maca plant that related to the radish family, maca has confirmed to be a natural healer that makes it possible with hormone and neurotransmitter production due to the presence of adaptogen. Additionally, Maca is a natural vitalizer and make it possible for people to overcome lethargy.
It is all-important to refer to a doctor before you shift to herbal remedies as the result mostly depends on the dosage and in which form they are consumed.
2. Pudina (Peppermint)
Pudina or peppermint did service for centuries to the treatment of the nervous system problems due to the existence of menthol as it used to calm the frazzled nerves and has a cooling effect. It is loaded with vitamins A and C, minerals including manganese, magnesium, iron, calcium, folate, copper, and potassium. Menthol helps to treat insomnia by keeping your mind calm and lets you sleep in peace.
3. Jatamansi (Spikenard)
Jatamansi is a simply perennial that is a herb plant that helps to cure insomnia and other sleeping problems. It is so-called for its anti-stress,  anti-depressant, and anti-fatigue properties. The roots of jatamansi are used for medicinal purposes in Ayurveda which are known to give a therapeutic result to stress disorders and mood swings. Jatamansi can remove negative thinking by channelizing the energies of the mind in the right moves.
4. Brahmi
Brahmi is like a small perennial creeping herb that has an age-old reputation for medicating stress. Brahmi acts as an adaptogen(non-toxic plants), which simply motive is that it helps the body modify to new or stressful situations. When swallowed, it is believed to grow the serotonin levels in the brain that help the mind keep calm and give comfort from anxiety and nervousness.
5. Ashwagandha
Ashwagandha is believed to relieve stress and anxiety due to the presence of active compounds like steroidal lactones, saponins, alkaloids, and withanolides that provide antidepressant, anti-inflammatory, and anti-anxiety properties. These all are helpful in reducing stress reasoned by emotional and physical fatigue. It also balances out the regular mood swings and increases mental alertness, concentration, and focus. It helps restore normal physiological functioning. Ashwagandha can be consumed in its powdered form or as a liquid extract.