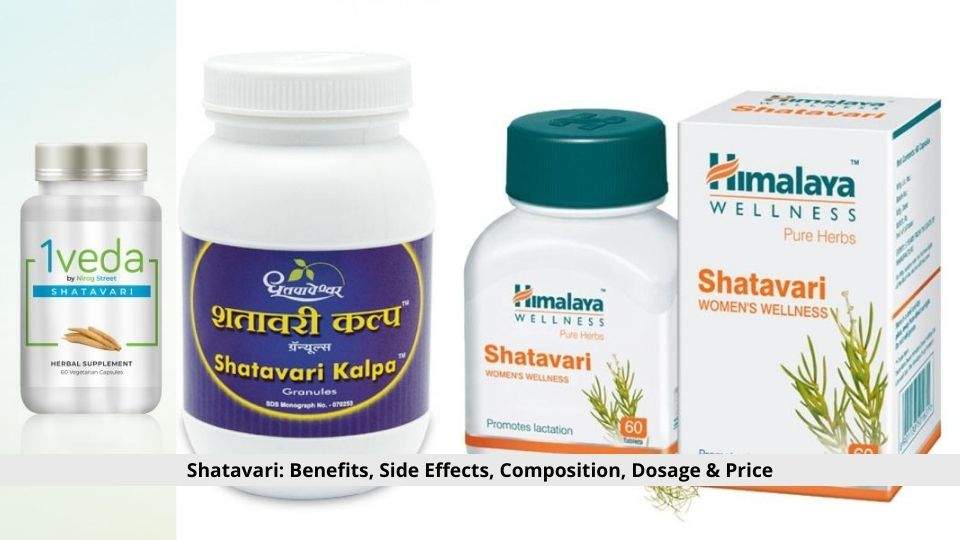 Shatavari is a natural remedy that has long been used in Ayurveda, the traditional medicine of India. Obtained from the roots of the asparagus racemosus plant, it is available as a dietary supplement, usually in tablet or powder form. Shatavari is said to have a variety of health benefits, including aid in treating stomach ulcers.

Herbs/Components Used in the Shatavari Tablet

The major ingredients of Shatavari medicine are Elaichi (Elettaria cardamomum)

Shatavari (Asparagus racemosus) root and Sugar. It is an ayurvedic medicine which is prominently used to maintain the female reproductive health.
Also, Read► Benefits And Side Effects of Himalaya Liv.52 Syrup

Improving Female Reproductive Health: Perhaps the most common traditional use of Shatavari is in the treatment of female health conditions, particularly reproductive disorders.

Helps With the Production of Breast Milk: Due to low milk production, new mothers often have difficulty breastfeeding their newborns. This can happen for various reasons, such as anemia, low blood pressure, or simply stress. The daily intake of Shatavari helps to facilitate and regulate milk production. This method is ideal for feeding young children and helping them strengthen their immune systems. Shatavari is a natural herb, so it will not harm the child.

Reduce Mood Swings: Mood swings are more common in women than men. This can occur due to menstruation, pregnancy, or hormonal problems. Mood swings can not only spoil our mood, but also make it difficult for us to deal with people. Taking shatavari regularly can help you easily combat mood swings.

Stomach Problems Can be Cured: Shatavari is known to treat stomach problems. The dried roots of Shatavari are turned into powder and can be made into juice. The consumption of this juice is ideal for curing ulcers and other gastrointestinal ailments. When consumed regularly, this plant can also cure gastroparesis.

Immune System Support: Research has shown that Shatavari plays a very important role in stimulating immune cells. This is assumed to be due to the steroidal plant compound contained within the root "sapogenin", a potent immune stimulator. It increases the body’s resistance during normal and immune-suppressed conditions, helping to boost immunity during immune-suppressed conditions and aiding in the recovery of the immune system itself. Sapogenins will also stimulate the cells that fight infection, reducing the overall population of infection-causing cells.

Acts as a Diuretic: Shatavari aids to fight against urinary tract problems and infections. It also maintains the health of the urinary bladder. Aside from this, regular consumption of Shatavari can help to reduce kidney stones in size and sometimes cure it completely.

Shatavari For Male Reproductive System: Although Shatavari is mostly used for the female reproductive system, it is also beneficial towards improving men’s health. The root powder has powerful spermatogenic properties that are extremely useful for treating abnormal sperm shape, low sperm count, low volume of semen, sperm motility, and sperm production. Being a natural antioxidant, it improves the production of male hormones like testosterone and luteinizing hormone. It also treats conditions like erectile dysfunction and premature ejaculation.

Manages Diabetes: The excellent hypoglycaemic property of shatavari plays a significant role in alleviating the blood sugar level of the body. The production of insulin from the pancreatic B-cells becomes active on taking shatavari root powder. It helps to reduce the breakdown of starch into glucose which in turn leads to low blood glucose levels.
Also, Read► Dashmularishta: Benefits, Side Effects, Composition, Dosage & Price

It may also interact with some substances or medical conditions and exhibit certain side effects.

Some of the side effects of Shatavari:

How To Use Shatavari Tablet/ Churna/ Syrup

1. Shatavari Juice
a. Take 2-3 teaspoons of Shatavari juice.
b. Add the same quantity of water and drink it on an empty stomach.

2. Shatavari Churna
a. Take ¼-½ teaspoon of Shatavari churna.
b. Take it with milk or honey twice a day after taking lunch and dinner.

3. Shatavari Capsule
a. Take 1-2 Shatavari capsule.
b. Take it with milk or water twice a day after taking lunch and dinner.

4. Shatavari Tablet
a. Take 1-2 Shatavari tablet.
b. Take it with milk or water twice a day after taking lunch and dinner.

Q. Can Shatavari and Ashwagandha be taken together?
Ans. Yes, Ashwagandha and Shatavari can take together. Both maintain Physically and mentally healthy lifestyles. Ashwagandha helps to reduce stress and keep calming due to Vata balancing nature and the other hand Shatavari reduces weakness and keep maintains sexual wellness due to Vajikarana (aphrodisiac) property.

Q. Does Shatavari cause cold?
Ans. Studies state that there are some side effects of Shatavari such as a runny nose, cough, and sore throat. So, avoid the use of Shatavari if you already have any of these symptoms.

Q. Does Shatavari cause gas and constipation?
Ans. Shatavari takes time to digest and might produce gas and increase the risk of constipation if you have any digestive problems. This is because Shatavari is Guru (heavy) in nature.

Q. Is Shatavari good for males as well?
Ans. Yes, Shatavari is also very useful for males for reducing general weakness and maintaining sexual wellness. This is due to the Vajikarana (aphrodisiac) property of Shatavari.

Q. Can Shatavari be taken with milk?
Ans. It is best to take Shatavari with milk. According to Ayurveda, milk is the best Anupana (vehicle) to take Shatavari powder or tablet.
Read More► Abhayarishta: Benefits, Side Effects, Composition, Dosage & Price