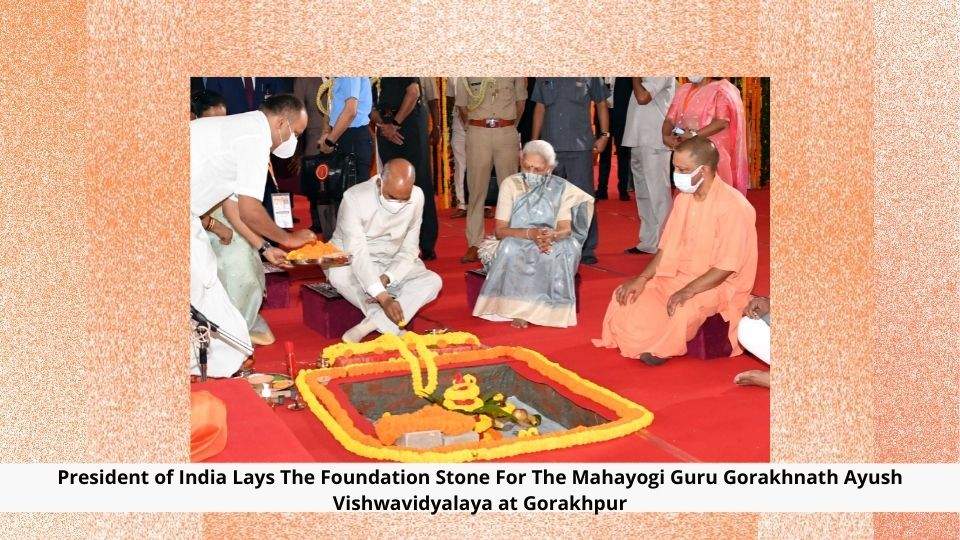 In the fight against COVID-19, especially in the second wave of the outbreak of the pandemic, AYUSH systems of medicine have played a vital role by increasing the immunity of people, said the President of India, Shri Ram Nath Kovind. He was speaking on the occasion of laying of the foundation stone for the Mahayogi Guru Gorakhnath AYUSH Vishwavidyalaya at Gorakhpur, Uttar Pradesh.

Just as the President began his address after foundation laying, it rained. The President described this coincidence as auspicious beginning for the project.

Addressing the gathering, the President said that many traditional and non-conventional systems of healthcare and healing have been prevalent in our country since ancient times. The Government of India has made continuous efforts for their development. For the systematic education and research of these systems of medicine, the Ministry of AYUSH was formed in 2014. He noted that Government of Uttar Pradesh had also established the Department of AYUSH in 2017. He was confident that with establishment of the Mahayogi Guru Gorakhnath AYUSH University, AYUSH medical institutes of the state would be able to do better work in their respective fields by being affiliated with this university.
Also, Read in Marathi► कोविड -19 विरुद्धच्या लढ्यात सामान्य जनतेची रोगप्रतिकारशक्ती वाढवून आयुष औषध प्रणालीने अत्यंत महत्त्वाची भूमिका बजावली आहे : राष्ट्रपती कोविंद

The President said that it is believed that Baba Gorakhnath has been one of the pioneers who have prepared medicines from minerals and metals as emergency medicines. Therefore, the naming of this University as “Mahayogi Guru Gorakhnath Ayush Vishwavidyalaya” is quite appropriate.

The President said that India is the best example of unity in diversity. People of India do not hesitate in adopting whatever is in public interest, beneficial and accessible to all. The practice of different types of medical systems in our country is also the result of this thinking. Yoga, Ayurveda and Siddha are India's contribution to the world.

The President said that today, the idea of Integrative System of Medicine is being recognized all over the world. Different medical systems are helping in curing the people as a complementary system to each other.

The President said that although the tribal society has a rich tradition of knowledge of herbs and herbal medicines, but in the past two decades, the popularity of AYUSH systems of medicine has increased across the country. The demand for medicinal herbs and plants has surged which is resulting in increasing income of farmers and forest dwellers as well as generating employment. He expressed confidence that the establishment of Mahayogi Gorakhnath AYUSH University in Gorakhpur would further boost the education and popularity of AYUSH systems. (PIB)
Read in Hindi► राष्ट्रपति ने गोरखपुर में महायोगी गुरु गोरखनाथ आयुष विश्वविद्यालय की आधारशिला रखी