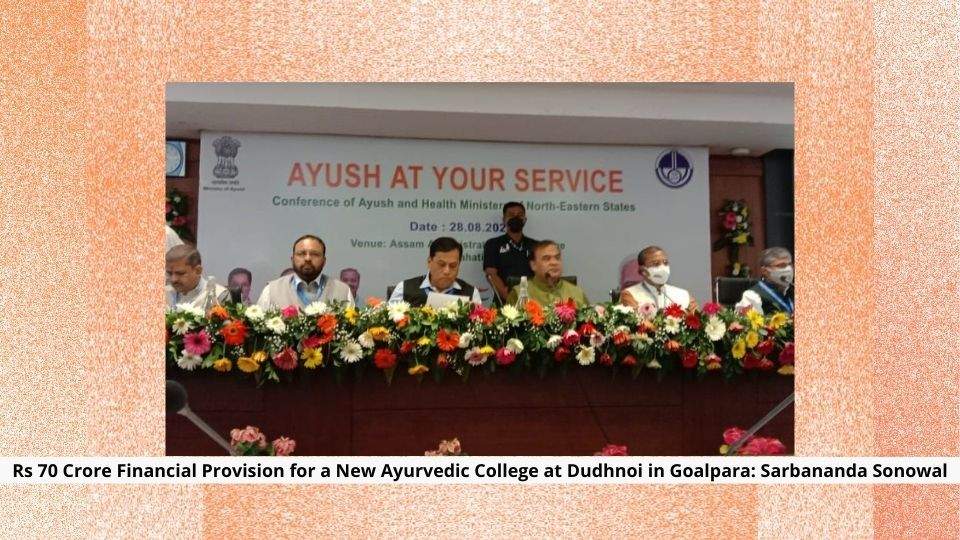 In a major boost to the initiatives to promote traditional medicinal practices in the Northeast Shri Sarbananda Sonowal, Union Minister of Ports, Shipping & Waterways and AYUSH, announced a slew of major initiatives at a conference of Ayush and Health Ministers of all the North Eastern States held here today. The conference was organised by the Ministry of AYUSH to discuss how the Ayush System of Medicines can be efficiently mainstreamed and can become more popular in the Northeastern states.

The Union Minister  Sonowal while addressing the media announced that in order to boost the education and training of Ayush medicinal experts, financial provision of Rs 70 crore, under National Ayush Mission(NAM) support, is to be provided for establishment of a new Ayurvedic College at Dudhnoi in Goalpara, Assam. The Ministry of AYUSH has also decided to upgrade the Government Ayurvedic College in Guwahati and develop it as a Centre of Excellence and a sum of Rs 10 crore as financial grant is to be provided in this regard, he added.

Shri Sonowal also announced that as many as 1000 new Health & Wellness Centres (HWC), as part of the National Ayush Mission (NAM) Scheme, will be opened in the NE states for growth and development of Ayush systems. With an aim to boost the popularity of traditional medicines provided by Ayush, the minister also announced setting up of 100 Ayush dispensaries under NAM in the north east region.

Informing that a facilitation Centre for Semi Processing of raw material is going to be opened up in NE the Union Minister said that along with this, it is also envisaged to set up Regional Raw Drug Repository (RRDR) in NE states in collaboration with National Institute of Bio-resources and sustainable development in Imphal, Manipur under Department of Bio-Technology.

The Ayush medical facilities under Northeastern State governments, central government and teaching hospitals in Ayush Colleges will be brought under Ayush-Health Management Information System (AHMIS) so as to develop digital data base of Ayush interventions in various disease management, the Minister informed.

Shri Sonowal also informed that the Ayush Ministry has planned to organize yearlong programmes on Azadi Ka Amrit Mahotsav to mark the 75 years of Independence by launching various initiatives by the ministry. The launching ceremony of the events will be held from 30th August to 5th September.

Dr Munjapara Mahendrabhai Kalubhai, Union Minister of State for AYUSH in his speech said that the government of India is taking various initiatives to promote traditional medicinal practices with increase in investments in the Northeast region.

Attending the conference as the Chief Guest, Assam Chief Minister Shri Himanta Biswa Sarma said that the entire Northeast has all the potential to develop into Ayush hub taking full advantage of the biodiversity of the region.

Medical Fraternity meet in Agra: Ancient Procedures of Ayurveda in the Modern World

Training Session for Regulators And Manufacturers of ASU&H Drugs