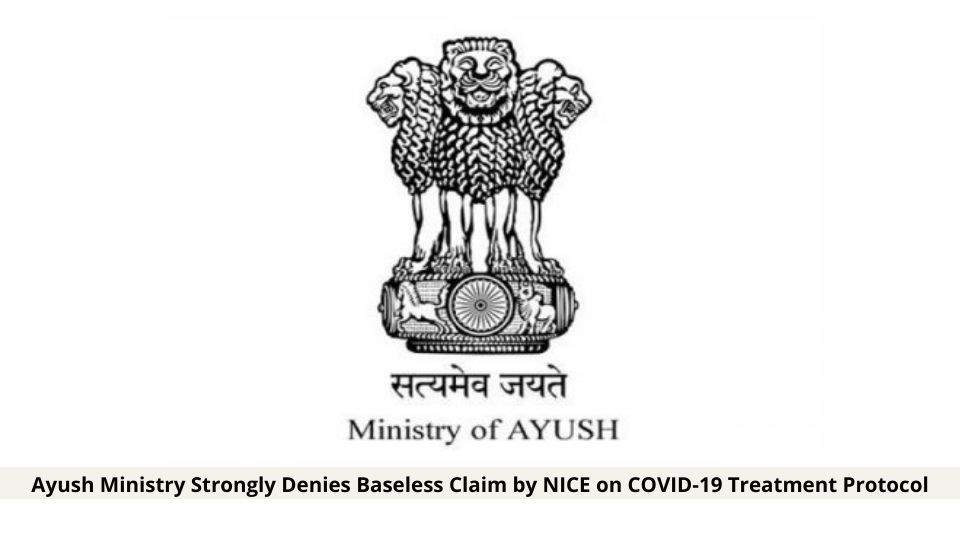 Some misleading claims have been made by a naturopathy related network NICE (Network of Influenza Care Experts)and have been published by some media platforms without journalistic verification. The main claim is regarding developing a protocol of treatment of COVID-19 that has been approved by the Ministry of Ayush. The claimant has unethically and misleadingly attributed the Ministry of Ayush’s approval to it. The Ministry of Ayush strongly denies all such claims of NICE and considers the publication of related news as completely misleading and baseless.

The Ayush Ministry further clarifies that the said agency, NICE, has not submitted any application for the so-called protocol to the Ministry of Ayush. If any proposal related with COVID-19 treatment/management is submitted to the Ministry by NICE, it will get it thoroughly examined by the Interdisciplinary Technical Review Committee (ITRC). The committee has a well-established and rigorous scientific screening process for such validation.

Without the approval of this committee, no Ayush streams related agency can claim to have developed a protocol. NICE has done a very unethical, illegal and baseless act in claiming to have developed an AyushMinistry approved naturopathy-based protocol for COVID-19 treatment. Equally serious is its act of using the name of the Ministry without Ministry’s explicit permission.

NICE like false claims fall under punishable offence according to order no. 40-3/2020-DM-II (A), dated 24th March 2020of the Ministry of Home Affairs and order no. 1-29/2020-pp (Pt II), dated 24th March, 2020 of the National Disaster Management Authority (NDMA). These orders make false claims a punishable offence so as to prevent the spread pf COVID-19 in the country. Some media organisations have published the false claim made by NICE without verifying the facts from the Ministry of Ayush.

National Institute of Naturopathy (NIN) Pune has clearly said that Network of Influenza Care Expert (NICE) has made some tall and misleading claims. The claim is regarding management/treatment of COVID-19 and NICE has wrongly attributed approval of its said protocol by the Ministry of Ayush.

It is further emphasized that NIN, Pune, working under the auspices of the Ministry of Ayush, has- already clarified in the local media that it not only strictly adheres by the guidelines prescribed by the Ministry of Home Affairs for the management, treatment and prevention of COVID-19 but also promotes these guidelines through IEC material and various activities. (PIB)
Also, Read in Hindi► आयुष मंत्रालय ने कोविड-19 के इलाज में एनआईसीई के निराधार दावे का खंडन किया