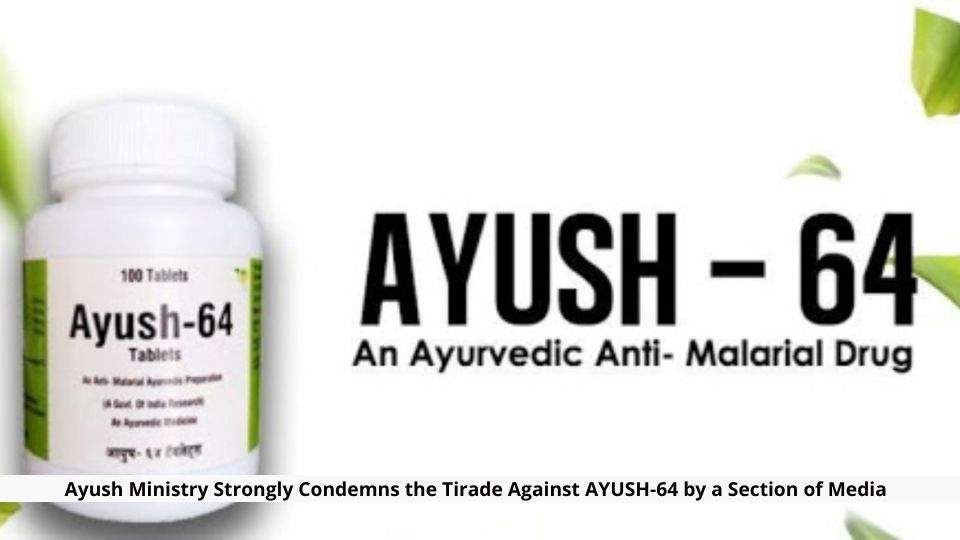 The one-sided tirade is focused on AYUSH-64, a herbal formulation found effective in the management and treatment of COVID-19 based on many larger studies and a robust multi centered clinical trial.

A malicious campaign is being carried out by a section of media against Ayurveda in general and the ministry of Ayush in particular for the last couple of days, citing a small study which is in pre-print stage (not peer reviewed yet). The one-sided tirade is focused on AYUSH-64, a herbal formulation found effective in the management and treatment of COVID-19 based on many larger studies and a robust multi centered clinical trial.

The news articles cite just one paper (while acknowledging themselves that the paper is a small, preliminary study), that too a pre-publication to discredit a sincere and concerted effort of the ministry of Ayush and the taskforce (the AYUSH inter disciplinary R&D Task Force for covid-19) made up of accomplished researchers from both Allopathy as well as Ayurveda. The pre-publication in question is borne out of a collaborative research project between the National Institute of Ayurveda, Jaipur and the All India Institute of Medical Sciences, Jodhpur. Both institutes are reputed and are apex centers of learning and research in respective fields with a long and rich legacy of patient care as well as research and condemn the mis-reporting done on the outcome of their study.

The Ministry would also like to quote Dr. JaykaranCharan who has been wrongly quoted in media. He has categorically denied and said, “I have never said that AYUSH 64 is ineffective or useless. On the contrary the drug in question, AYUSH 64, has shown efficacy in the primary endpoint…The results clearly show that AYUSH 64 is a safe drug with an equivalence in safety with standard of care Statistically ‘No difference’ does not mean ineffective or useless, it means equivalent.”
Also, Read in Marathi► आयुष-64 विरोधात प्रसारमाध्यमातील एका गटाद्वारे होत असलेल्या हिणकस टिकेचा आयुष मंत्रालयाने केला तीव्र निषेध

The motivated news articles are a classic case of misinterpreting the facts and seeing the glass half empty. The pre-publication categorically states that “On comparing both the groups for frequency of RT-PCR negative subjects on day 5th, it was found that 21 (70%) subjects from the AYUSH 64 group and 16 (54%) subjects from control group were RT-PCR negative on 5th day. Though the actual events of negative RT-PCR were more in the AYUSH 64 group, but this difference was not statistically significant [p=0.28]. There was no statistically significant difference between two groups for fever and respiratory symptoms and lab parameters. No serious adverse events reported from any group during the assessment period.”

The results of the said study clearly show that Ayush 64 is a safe drug with an equivalence in safety with the standard of care. Also, the pre-publication cites a larger study (Chopra A, Tillu G, Chuadhary K, Reddy G, Srivastava A, Lakdawala M, et al. Coadministration of AYUSH 64 as an adjunct to Standard of Care in mild and moderate COVID-19: A randomized, controlled, multicentric clinical trial. medRxiv 2021.06.12.21258345. https://doi.org/10.1101/2021.06.12.21258345) which takes care of the lacunae of the pre-publication.

These news articles go against the tenet of unbiased reporting. Generalising outcome of a pilot study with limited sample size is wrong. The journalist out of nowhere claim that the drug is ineffective, based on the study which shows its better relief in percentage, though due to small sample size it cannot be ascertained and hence is statistically insignificant. More robust studies of larger sample size and multicentric exposure have established its efficacy as add-on to standard care. The study preprint itself mentioned that a larger sample size study is required.
Also, Read in Hindi► आयुष-64 को लेकर की जा रही गलत रिपोर्टिंग की आयुष मंत्रालय ने कड़ी निंदा की