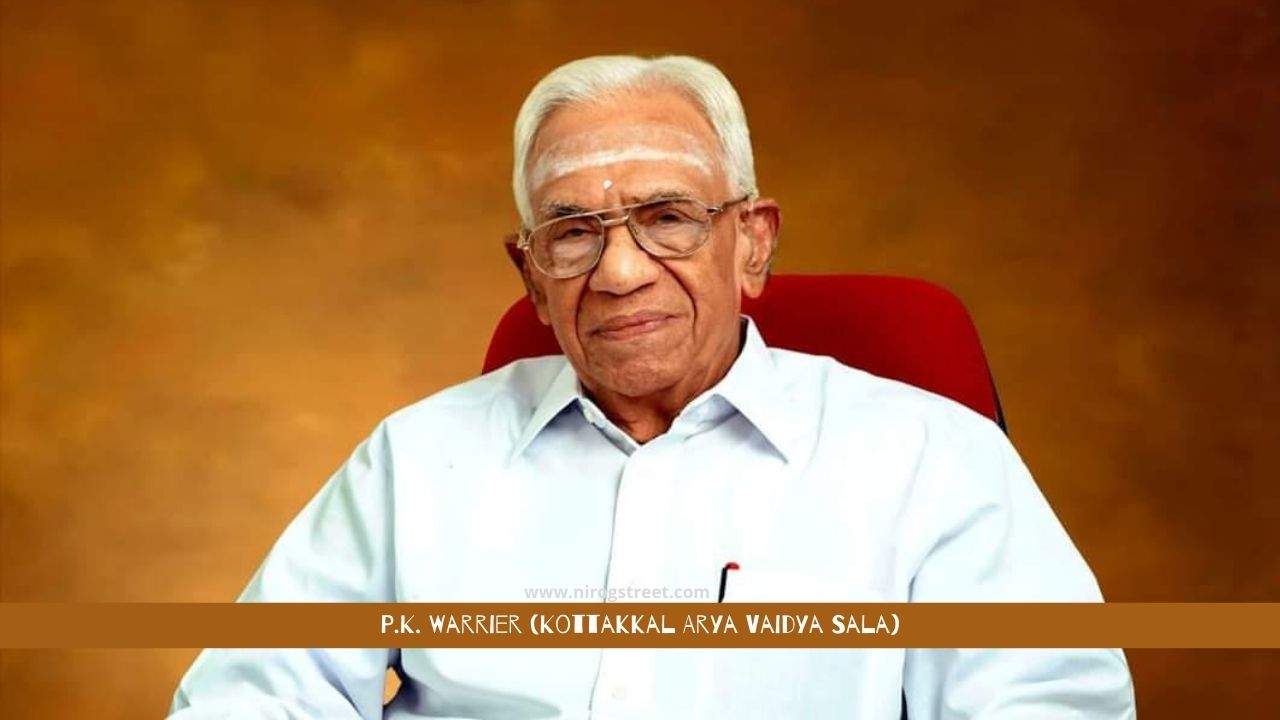 Thiruvananthapuram, P.K. Warrier, the flag-bearer of Ayurveda and one of the popular exponents of Kerala's traditional medicine system, passed away at the age of 100 at his hometown in Malappuram district on Saturday.

Condolences have started pouring in following his demise.

Recalling his personal experience, Former Defence Minister A.K. Antony said one day he received a call from the then Prime Minister P.V. Narasimha Rao, saying that the then Sri Lankan Prime Minister Sirimavo Bandaranaike was unwell and was unable to walk so after several discussions it was decided she would undergo Ayurvedic treatment.

"It was decided that she (Sirimavo Bandaranaike) will fly down to Thiruvananthapuram and stay at the official residence of the Kerala Governor while a team of Ayurveda doctors led by Warrier began their treatment. She came on a stretcher and I was there to receive her at the airport but after the treatment, when I went to see her off I saw her smiling and walking smartly," Antony added.

"Warrier was a humble and simple person but was a storehouse of knowledge in his subject. One of the foremost Ayurveda exponents has left us which is a huge loss," said Antony.

He had turned 100 in June this year but was infected with Covid-19, following which he was suffering from urinary ailments.

He was the managing trustee of the Kottakkal Arya Vaidya Sala, an Ayurveda treatment centre which produces Ayurveda medicines.

He was a recipient of the Padma Shri in 1999 and the Padma Bhushan in 2010. His wife was late Madhavikutty K. Warrier, a poet.

"As a physician, he was committed to the scientific pursuit of Ayurveda. He will be remembered for his outstanding contribution to the modernisation of Ayurveda. As a humanist, he envisioned a life of good health and dignity for everyone in society. The demise of P.K. Warrier is a huge loss for medical fraternity," Khan said.

Kerala Chief Minister Pinarayi Vijayan said it was Warrier's efforts which gave Ayurveda a new dimension and acceptability across the globe because of his strong scientific base with which he was able to present and project Ayurveda.

MAN OF VISION AND ACTION

Padmashri Panniyampilly Krishna Warrier was born on June 5, 1921 in Malabar district of the Madras presidency. He studied Ayurveda in Arya Vaidya Pathasala, in the village of Kottakkal, in the Southern Indian state of Kerala. where he graduated as Aryavaidyan. In 1954, he was catapulted into the position of Managing Trustee of the then small Arya Vaidya Sala (AVS) in Kottakal. He has administered the entire institution ever since, concurrently holding the position of AVS’s Chief Physician. Under his stewardship, AVS has grown from strength to strength. Today, it is recognized as India’s premier Ayurvedic Treatment and Research Center, a multifaceted institution, where authentic Ayurveda is practiced and research in Ayurveda and related areas is undertaken. Its objective is for Ayurveda to be internationally recognized as a robust, scientific system of healthcare, capable of meeting all challenges emerging in the course of time, particularly those caused by today’s changing lifestyles. Arya Vaidya Sala has become a premier destination for scholars, students and patients alike, both from within India and overseas. Kottakkal is now a synonym for authentic Ayurveda. It considers treatment of patients as its primary mission. Over 800,000 people benefit every year from free consultations at its hospitals, twenty-two branches are located in different parts of India.

Dr. Warrier is an exponent of holistic medicine. While practicing and propagating Ayurveda as a scientific system of healthcare, he also acknowledges the validity of other systems and keeps himself up to date with advances in other fields. He points out those aspects of the World Trade Organization’s initiatives on patents and TRIPS with implications for Ayurveda and indigenous systems of healthcare. Similarly, he was a strong supporter of the World Health Organization’s Alma Ata Declaration, advocating co-operative efforts in the field of medicine. He popularized the message contained in the UN declaration through his speeches and writings. His statesmanlike support for the Alma Ata Declaration won universal acclaim. Dr. Warrier’s writings and speeches on inter- and intra disciplinary subjects have greatly enriched contemporary medical literature. He has written many papers, of which a collection in Malayalam has been published under the title–‘Padamudrakal’–speeches and writings of P. K. Warrier. He has also focused attention and passion on Ayurvedic education in colleges and universities. As Secretary of Arya Vaidya Samajam, he has guided the growth of the Vaidyaratnam P.S. Warrier Ayurveda College (previously Arya Vaidya Pathasala) for over two decades, during the time when it was upgraded to an Ayurveda College. He has also served as Dean of Ayurveda Faculty, Calicut University and Chairman of its Board  of Studies. In recognition of his unique academic achievements, the University of Calicut conferred on him the degree of D. Litt. in May 1999. He was twice elected as president of the All India Ayurveda Congress, once in 1981 and again in 2003.

P. K. Warrier Dr. Warrier has made special efforts to incorporate scientific advances and technological innovations in AVS. Manufacturing processes have been upgraded to enhance their efficacy and ensure product quality, always taking care not to deviate from the basic tenets laid down in the classical texts. An efficient quality control laboratory has been established to test and certify both raw materials and finished products. Under his initiative, research on different fields of Ayurveda has been organized and carried out. Clinical research is his forte. Continuously sustained research programs in the fields of rheumatoid arthritis and treatment and alleviation of pain in cancer cases have been undertaken with encouraging results. Extensive research has been completed on endangered plant species in collaboration with nationally and internationally reputed bodies like the Department of Biotechnology, New Delhi, IDRC (Canada) and Sir Dorabji Tata Memorial Trust. As a Research Institution, Arya Vaidya Sala is now recognized by the Government of India’s Ministry of Science and Technology. Its Department of Biotechnology has extended assistance in implementing research programs on medicinal plant conservation. In 1996, the Russian Medical Association invited him to attend its Ayurvedic Seminar in Moscow. In 1998, he led a team from Kottakkal to participate in the two-day Ayurveda Conference, ‘Ayurveda for the 21st Century - Paradigm for Health’ in New York. He chaired its Scientific Session, presenting a paper on Panchakarma. He also lectured at New York City’s India Club to World Bank and IMF Executives. Many took advantage of his presence in the city for clinical consultations. This extensive tour and interaction with dignitaries generated a great deal of international interest in Ayurveda.

As Head of India’s premier Ayurvedic institution and as a person actively engaged in the study of science, he has held high positions in many national and international committees. He has utilized such forums effectively to further his mission of popularizing Ayurveda and reaching out to those suffering from all kinds of health problems. An ardent advocate of medical ethics, he strongly disapproves all tendencies for medical practitioners to transgress their legally permitted fields of practice and to exploit the ignorance of laymen. He has opposed all trends to commercialize Ayurveda, never compromising his principles.

Dr. P.K. Warrier has shown active interest in social movements for his whole life. He has been involved in almost all the social and cultural movements of his time. He opines that experiences of such social work have made him more considerate, caring and compassionate.

Arya Vaidya Sala forms his extended family. When colleagues, workers in industry or eminent persons from academic and cultural fields come to him seeking help or advice, he treats all equally, extending help with affection and consideration, a benevolent patriarch not only to his family, but to all who come to AVS. More than anything else, he is loved and respected as a physician. Patients come to Kottakkal from everywhere for his healing touch. Wherever he goes, at home or abroad, patients wait for consultations.

Padmashri Dr. P.K. Warrier’s story is one of successes achieved through dynamic action, stimulated by an almost missionary zeal to reach out to the ailing and suffering and give them succor and hope through his constant efforts to attain their desired goal. His story, extraordinary in itself, tells how a single man, in a half century of untiring effort, has transformed an ordinary institution in a tiny village into a multi-unit, multi-crore international service organization, now almost synonymous with Ayurveda itself.